Likes civilizations that bring religion to the Kongo. Dislikes those who have founded a religion but not spread it to a Kongolese city.

Wikipedia has a page called:
Afonso I of Kongo

Mvemba a Nzinga (c. 1456 – 1542 or 1543), baptized Afonso I, was the sixth Manikongo of the Kingdom of Kongo from 1509 until his death. He is known for his conversion to Christianity and spread of the religion through his kingdom after the arrival of the Portuguese in Kongo, as well as his condemnation of the Portuguese slave trade. He leads the Kongolese in Civilization VI.

Mvemba's Kongo is a land of apparent paradoxes: a religious civilization without

Faith generation or Holy Sites, and one that can grow to a huge

Population in the middle of the Rainforest.

Mother Earth has many gifts for you, King Mvemba a Nzinga. Your people know the dense woods and rainforests as their homes, and glide through them with ease. Great also are the gifts that come from travelers of distant lands. Keep an open mind, for the inspiration of the open world will let our people create art with power and majesty.

His leader ability is Religious Convert. He may not build Holy Site districts, gain Great Prophets, or found a religion. However, he gains all beliefs of any religion that has established itself in a majority of his cities and receives an Apostle (of that city's majority religion) each time he finishes a Mbanza or Theater Square district in one of his cities.

Kongo's initial push is to grab as much Rainforest or Woods as they can get (which shouldn't be a problem unless Brazil is nearby). Using the Mbanza (which provides plentiful

Housing as early as the Medieval era) and

Food from these Rainforest or Woods tiles, they are able to grow large cities quickly. Mvemba will also pick the largest Religion in the game and get it spread into the majority of his cities so Kongo can duplicate all of the Belief bonuses (without having had to generate a single point of

Faith)! If they do end up with

Faith, they can use it to patronize Great People, augmenting their Nkisi civilization ability that already allows them to generate plenty of Great Works with highly enhanced yields. By combining bonus yields from Religion and Great Works, they can be a contender for any victory, though Culture is a perfect fit.

Delegation: My trade delegation should be arriving soon with fufu. Enjoy the meal!

Accepts Delegation from Player: Your trade delegation arrived at my capital, where we welcomed them with open arms. And thank you for your gifts.

Accepts Player's Declaration of Friendship: On behalf of the people of Kongo, I accept your friendship and good will.

Refuses Player's Declaration of Friendship: Kongo is not ready to accept your friendship. Let our relationship ripen first.

Requests Declaration of Friendship: I extend my hand in friendship to you. Let our people be brothers and sisters under the Lord.

Player Accepts Declaration of Friendship: Thank you, my friend.

Trade Deal Rejected: That is unfortunate.

Denounced by Player: I have done nothing wrong, and the people of Kongo do not deserve your slander.

Denounces Player: You are an evil upon this world. Your name will be cursed for ages.

Invitation to Capital: Let us exchange information as we exchange wisdom. Tell me of your capital. Is it a holy city?

Invitation to City: Before we continue, come worship with me at our nearby city. Then we can enjoy a meal of chicken moambé.

Virtually all that is known about the lengthy reign of King Afonso I of Kongo comes from his correspondence with the Portuguese kings Manuel I and Joao III. The few contemporaries that were actually present at court had little to say … or little that was written down. Luckily, Afonso’s letters are lengthy, detailed, and at times even insightful; most of these are extended complaints about ill-behaved Portuguese adventurers, colonists, officials and traders.

Born Mvemba a Nzinga, firstborn of Mwene Kongo (king) Nzinga a Nkuwu, fifth of the dynasty, the heir apparent was in his 30s when the Portuguese arrived in the capital M’banza Kongo in May 1491 AD, having followed the course of the explorer Diogo Cao. His father promptly converted to Catholicism (perhaps, having heard tales of how the Church converted other kingdoms, a wise decision), taking the Portuguese moniker Joao I for himself; Mvemba got baptized as well, and now was Afonso. Recalled from the Nsundi province that he administered, Afonso studied with “godly” priests and Portuguese “advisors” to the king. According to reports by the priests, he was an enthusiast and “true” disciple of Christianity.

Indeed, so committed to his faith was he, Afonso had native art objects that might offend Catholic sensibilities destroyed, and launched a program encouraging conversion in the province. His alliance with the Catholic Portuguese served him in good stead when his father died. The kings of the Kongo were elected, and there was no guarantee that the convert would succeed his father, despite the old man’s faith. But Afonso’s mother, clever lady, managed to keep the king’s death secret until her son could return to the capital and gather followers. When the announcement was finally made, Afonso was present with his supporters (heavenly and otherwise) and promptly became the Mwene Kongo.

But all was not roses in the garden of Kongo. Afonso’s half-brother Mpanzu, within a week (pretty fast, given that Kongo had a four-day week), had raised an army to march on M’banza. Renouncing Christianity, his army rapidly grew among those that venerated Nzambi a Mpungu, the creator who existed solely outside the physical world. When Mpanzu tried to storm the capital, according to Afonso, God took a hand. An apparition of Saint James and five “heavenly riders” appeared in the sky and the heathen host fled the battlefield. The miracle, described in a letter by Afonso (so perhaps a bit biased), ended any opposition to his rule.

Seems the miracle also spurred Afonso I to ensure that his kingdom was on the path of righteousness, for he spent much of his time trying to make Kongo Catholic. He established the “Roman Catholic Church of Kongo,” financing its churches and schools with the royal treasury (mostly taxes taken from the people). By 1516 there were a reported 1000 students in M’banza, where the children were learning to read and write and be good Catholics. Afonso spent a lot of time trying to merge the religious traditions of the Kongo with the Christianity of Europe; it didn’t work. He also sent some his kin to Europe to study, including his son Kinu a Mvemba, who was elevated to a bishopric in 1518 by the Vatican.

For his troubles, Afonso earned the sobriquet “The Apostle of Kongo” among the church fathers.

Although a staunch Catholic, Afonso was somewhat less enamored of the Portuguese. While he seemingly was open to modernization, he refused to adopt the Portuguese legal code when pressed, and he blocked laws to allow the sale of land to Portuguese prospectors. But it was the issue of slavery that proved the most contentious. In a series of letters beginning in 1526 AD, Afonso condemned the violence of the Portuguese in building the Atlantic slave trade; in fact, he threatened to shut down the slavers operating from lands under his control. He blamed the destabilization of his country upon the intensifying Portuguese trade in slaves in Kongo’s southern provinces. But many of his own nobles profited from the trade in people, and so the only real limit Afonso managed to enact was a royal committee to determine the status (regarding “free” versus the several states of slavery) of all persons presented for sale.

Despite this, Afonso signed the Regimento of 1512 by which the Kingdom of Kongo accepted Portuguese institutions, granted extraterritorial rights to Portuguese living in the land, and allowed the sale of “legitimate” slaves to Portuguese merchants. With Portuguese help and with Portuguese tradesmen, Afonso rebuilt the capital city using stone. With Portuguese armaments and Catholic blessings, his troops expanded the kingdom south and east. The Kongo crown also controlled all external trade, and Afonso increased the export of ivory and raffia to Europe to fill his coffers, helping pay for all these “modern” benefits.

As Afonso neared the end of his life, several of his many offspring began maneuvering for the aftermath. In 1539, the aged king avoided assassination while attending Easter services, a plot that included several Portuguese residents of the country. In 1542 (or perhaps 1543, records in Kongo being what they were), Afonso died quietly. His son Perdo succeeded Afonso, but didn’t fare well, being overthrown by one of Afonso’s many grandchildren (this one Diogo by name) a couple years later.

Promotional image of Mvemba a Nzinga

Portrait of Mvemba a Nzinga overseeing a construction project, by Carl Owens 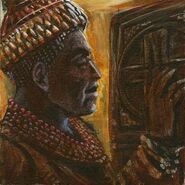