Wikipedia has a page called:
Carrack

Unique unit of the Portuguese civilization. Replaces the Caravel.

The Nau is a naval melee unit that replaces the Caravel and is skilled at exploration. When it is in a tile next to land owned by another civilization or City-State you are at peace with, it may perform a one-time trade mission (Sell Exotic Goods) to earn gold and XP. The farther the land is from your own capital, the greater the bonus, so it is best to use on distant players. Use this unit to explore the map and uncover the locations of other players.

With Mercantilism (from the Commerce policy tree) and Big Ben, one is able to earn gold by buying a Nau, performing Sell Exotic Goods in a nearby foreign city, and deleting it in home territory. The profit is at least 70

Gold, though it varies depending on the distance between the player's capital and the Nau's destination.

As the Portuguese extended their explorations and trading ventures further along the African coast and to the Far East, they needed a larger, sturdier ship capable of long voyages. The Nau, often referred to as a "carrack" or "Indiaman" by the English, evolved from the square-rigged cog widely used for commerce in the late Middle Ages. The design was perfected by Portuguese merchants in the late 1400s; the Nau came to be a three- or four-deck ocean-going vessel with three or four masts, with a broad beam stable in the high seas of the Atlantic, and capable of carrying provisions and cargo for a lengthy trip. It had a rounded stern and a high forecastle incorporated into the bow, the first ocean-going vessel with such. Its large storage holds meant that it could traverse great distances between landfalls, making it a mainstay in the Portuguese merchant fleet. The Nau would be supplanted by the Galleon on the ocean trade routes by the 1600s. 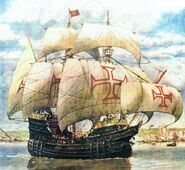 Painting of a Nau
Français
Community content is available under CC-BY-SA unless otherwise noted.
Advertisement