Portuguese unique naval melee unit that replaces the Caravel. Starts with 1 free Promotion and is less maintenance. Has two charges to build Feitorias.

The Nau is a unique naval melee unit of the Portuguese civilization in Civilization VI. It replaces the Caravel.

The Nau is a decent upgrade to the Caravel, since it adds extra flavors to a unit that is otherwise utterly underwhelming and underused (read more here).

The Nau has no stronger combat statistics when compared to the standard Caravel, which is a step in the right direction, since extra

Combat Strength will easily go to waste on a unit that is not meant for fighting. Instead, each Nau has 2

Production for every Portuguese

Trade Route that ends in those cities. Since the main strength of this unit is the Feitoria, your main goal as Portugal is to crank out as many Naus as possible to scout out potential positions for Feitorias. The Nau's low maintenance cost and the Navigation School make the goal a lot easier to achieve. The Venetian Arsenal can be thrown into the mix to amplify this power spike even more, although it is not always compulsory, since the Feitoria has a restrictive placement rule, so having a lot of Naus without suitable places for Feitorias is useless.

The Nau, just like the unit it replaces, has a very short period of relevance, since its upgrade, the Ironclad, is unlocked with Steam Power, only one era later. You can make it last a little bit longer by 2 methods, each has its own downside:

build charges, the Nau basically reverts back to being a Caravel, which is not very useful and will drain your treasury away. Even when Portugal is guaranteed a generous

Gold income, there is just not much reason to keep these units around when they have clearly outlived their usefulness. You can delete them, and maybe keep some Helmsman-

Promoted Naus around for exploration. (And yes, Naus start with a free

Promotion, even ones upgraded from Galleys, but considering how often they will be used for any reason other than exploring and Feitoria-building, Helmsman is the standard choice.)

Similar to other unique units with

build charges, Naus can clear and repair improvements for free (as long as they have at least 1 remaining

build charge), and they can also clear nuclear fallout (which costs 1

During the 1300s to the 1500s, the Portuguese dominated the seas. Trade networks linked Lisbon and ports across Asia, Africa, and the New World, and reshaped how we see the world today. For instance, without the Portuguese introduction of New World chili peppers to Asia, we would not have spicy Thai food, and without the Portuguese presence in Japan, we would not have tempura (from the Latin quatuor anni tempora – a time of eating no meat). But it was not all spices: nau transported gold, Catholic missionaries… and enslaved persons.

The nau was a larger version of the caravel, with square sails in the front, and triangular sails on the mizzenmast. Their heavy build allowed them to navigate stormier seas, especially around the southern tips of Africa and South America, and to reach farther than the caravel or cog. 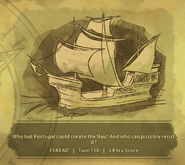 Historic Moment for building the Nau
Community content is available under CC-BY-SA unless otherwise noted.
Advertisement