Building of the Medieval Era

Production toward naval units in this city.

Science for every two coast or lake tiles in this city.
+1

Wikipedia has a page called:
List of maritime colleges

The Navigation School is a unique building of the Portuguese civilization in Civilization VI. It is built in the Campus district and replaces the University.

Simply put, the Navigation School is a great replacement for the University. It offers all the same bonuses that the University does in addition to +1

Production to naval units and +1

Science from every two Coast or Lake tiles in the Navigation School's city, all without being more expensive to build or maintain. Naturally, as Portugal, you will want all of your cities to be coastal, and this building puts another layer of emphasis on that, since none of its bonuses can be used consistently by an inland city.

The extra amount of

Science can be really game changing if some of your cities are built on tiny landmasses surrounded by water. The total amount of

Science can triple, or even quadruple the base

Science granted by a University. Of course, not every city can generate a meaningful amount of bonus

Science with this building, since it is perfectly normal to have coastal cities with very few coast tiles (especially ones on the coast of a large continent or landmass), but on average, it should have the same effects as having Isaac Newton, which is one of the most powerful and contested

The Navigation School is also part of the Portuguese strategy to establish Feitorias across the map. The +25%

Production towards naval units allows Portugal to build large numbers of Galleys when combined with the Press Gangs military policy card, which can then be upgraded with the

Gold Portugal will be dripping in from their international

Trade Routes (and which they can spend less of by slotting Professional Army right before upgrading) into Naus. This gives Portugal a spectacular mid-game push around the late Medieval to early Renaissance, when their

Trade Routes become much stronger with policy cards such as Trade Confederation (unlocking at Mercenaries) and Wisselbanken (unlocking at Diplomatic Service). Having 2 Naus triggers the

Inspiration for Exploration, which unlocks Merchant Republic, and allows for proactive construction of Feitorias in cities you're trading with. If you want to create a naval empire, this is the time to build the Venetian Arsenal as well, although between Press Gangs, the Navigation School, and any inherently productive tiles in a powerful coastal city, the Arsenal might be overkill and your time may be better spent just pumping out ships.

Sagres is the southernmost point in Portugal, the last safe shelter before ships would depart across the storm-tossed Atlantic. Looking south, Portuguese sailors faced rough seas and the forbidding “Cabo de Não” – “Cape No,” that stretch of the Atlantic coast of what is now Morocco where the Sahara begins. For long considered the end of the navigable world (hence the name) by European and Arab sailors, Cabo de Não (now called Cape Chaunar) had to be overcome for the Portuguese to realize their dream of a ship-based empire.

The planning for – and ultimate success of – Portuguese expeditions around the Cape, and around other, farther, more forbidding capes, happened at schools of navigation. While some scholars interpret this “school” term loosely, noting that most Portuguese sailors probably did their studying practically aboard ships, others posit a centralized school of navigation – placed by the most romantically-inclined scholars right at the Sagres Point. From here, sailors would be able to see firsthand the dangers of the Atlantic… and plot out ways to overcome them.

The Law Faculty building of the University of Coimbra, with the statue of João III in front 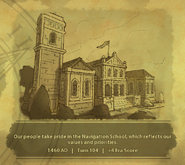