Combat Strength when defending against ranged attacks. Can move and see through Woods and Rainforest.

The Ngao Mbeba is a unique melee unit of the Kongolese civilization. It replaces the Swordsman.

In the Gathering Storm expansion, the Ngao Mbeba requires 5

The Ngao Mbeba gives the Kongolese player great advantage in Woods or Rainforests, because of its much greater maneuverability. Furthermore, this unit is more resistant against the bane of the melee units - Archers and the like - and in vanilla Civilization VI and Rise and Fall it may be built even when the civilization doesn't have access to

Use these advantages to expand your civilization while others are still struggling to overcome all the early game difficulties that Woods and Rainforests present. Ideally you could target and conquer a nearby civilization also based around these features (Brazil, for example) to secure a strong start in the game. Scout surrounding areas well and if such a civilization exists, mass-produce Ngao Mbebas and attack!

The Kingdom of Kongo’s army was a mass of archers with a smaller contingent of heavy infantry, which carried swords and shields. The colonial Portuguese referred to the latter in their accounts as adagueiros (“shield-bearers”) while in the few surviving native documents the Swahili term ngao mbeba is used. While the archers were militia conscripts in time of war, there is some evidence that the standing ngao mbeba were supported by stipends from the king. Perhaps as many as 20 thousand were garrisoned in the capital, with smaller contingents in the provinces under the command of the local authority. Under king Afonso I, a small unit of Portuguese-armed native musketmen was raised, and eventually the old shield-bearers were replaced by the deadlier youngsters. 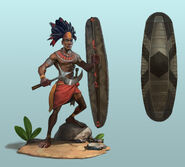 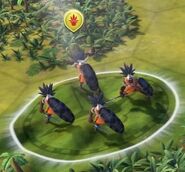 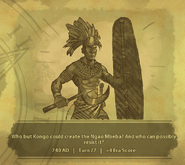