Food if adjacent to a City Center
+1

Science if adjacent to a Campus
+1

Gold if adjacent to a Commercial Hub
+1

Gold if adjacent to a Harbor
+1

Faith if adjacent to a Holy Site
+1

Production if adjacent to an Industrial Zone
+1

Culture if adjacent to a Theater Square

The Nubian Pyramid is a unique tile improvement of the Nubian civilization in Civilization VI. It must be built on Desert, Desert (Hills) or Floodplains (in Gathering Storm, Desert Floodplains only) tiles.

The Nubian Pyramid can be extremely useful when used correctly. Because of Kandake of Meroë, Nubia already gets 20% extra

Districts, and that rises to 40%

Production when a Nubian Pyramid is adjacent to the City Center.

Food if built adjacent to a City Center), allowing these tiles to actually contribute to Nubian

Food on each tile is still not amazing, Nubia should still look to settle on the edge of deserts and not deep within them, unless the city has many Desert Floodplains which can be improved with Farms.

Food. The price of settling near these unfavorable tiles is slightly offset by both the extra

It would be remiss to not mention the other part of the Nubian Pyramids' ability, which is gaining +1 yield from all adjacent districts (based on their respective yields). Think of this as a Government Plaza in reverse: instead of granting a +1 bonus to all the

Districts around it, it gets bonuses based on the

Districts around it. However, due to the general lack of adjacency bonus opportunities in deserts, Nubian Pyramids should be used as a fallback plan. Nubia's

Nubian Pyramids can be placed next to one another, and there's no limit on the number a city can have. Quantity is more important than quality for Nubian Pyramids, so instead of trying to place every unique

District around a single Nubian Pyramid, place several of them around each

District to get the specific yield you care about (e.g. surround a Campus with Nubian Pyramids for extra

Science). In fact, in a situation where you're in need of

Science but have no Mountains or Reefs, it's better to build a Campus with no adjacency bonus and build Nubian Pyramids on the 6 tiles adjacent to it, which translates to a +6

Desert tiles without any adjacent

Faith in one turn than Nubia will probably gain from an individual Nubian Pyramid over the course of an entire era.

During their on-again/off-again periods of mutual conflict, Nubia found its culture influenced by the powerful Egyptian dynasties further down the Nile. Nubian burial customs would eventually come to resemble those of Egypt. Nubia’s Kingdom of Kush began burying its kings and queens in pyramids sometime in the First Millennium BCE.

Nubia took a vastly different approach to its pyramids than Egypt. Rather than build immense tomb complexes that bankrupted their state, they opted for a more practical method: smaller pyramids with no more than a 26 ft (8 m) wide base, steep sides that rose at a sharp angle in the air, and an ornate entry chamber that extended from the pyramid tomb. Though treasure hunters plundered most of these pyramids since Nubia's fall, the pyramids remain a powerful testament to Nubia's legacy. 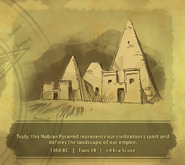