Science from every 2 adjacent Farm and district tiles

Science from each adjacent Plantation

Wikipedia has a page called:
Observatory

The Observatory is a unique

District of the Mayan civilization in Civilization VI. It replaces the Campus.

The following buildings can be constructed in an Observatory:

District. This is the true winning condition of the Maya, since they will race towards a Scientific Victory in a pace that can be matched only by a few other civilizations. Since the Maya has tier 2 starting bias towards Plantation Resources and tier 1 bias towards Grassland and Plains, it is quite simple to get an Observatory with at least +4

Science adjacency in every city, since just 1 Plantation and 4 Farms surrounding an Observatory will give it +4 already. This district is also a good reason why the Maya is not afraid of waging early wars to claim land around their

Science potential will help you tremendously in catching up in scientific advancement. The raw potential of this district even eclipses the Seowon, since it is easy to get it up to the starting adjacency bonus of the Seowon, and it scales upward dramatically with each adjacent Plantation.

The Maya, who were both intensive agriculturalists as well as consummate mathematicians, took an intense interest in the movement of the heavens. At observatories in Mayan cities such as Palenque and Chichén Itzá, Mayan astronomers used an artificial horizon – a flat, circular platform of regular size – on which they marked carefully the points at which stars, planets, the moon and sun rose and fell each year. The Mayans used these observations to create detailed calendars. We are familiar with a solar one – our 365-day calendar is based upon the length of time that it takes for the sun to complete one cycle, but many cultures also use a lunar calendar (i.e. the length of time it takes for the moon to wax and wane 12 times). The Mayans added more and more cycles to this. For instance, the planet Venus takes 584 days to return to the same spot on the rim of one of the Mayan observatories’ artificial horizons. Noticing and recording this, the Maya also developed a Venusian calendar. Finally, to these astronomical observations, the Mayans added a 260-day calendar, one that lines up with the average time from human conception to birth.

The function of this astronomy was astrology, religion, agriculture, and politics combined. The stars and planets (as were, at times, Mayan rulers) were Mayan gods. As calendars interlinked, different activities – planting, warfare, festivals, the fortunes of a particular leader – would become more or less auspicious. Astronomy via the observatory was, for the Mayans, a way of tracking how the natural world, the supernatural world, and the political world were interlinked. Today, astronomical observations and calendrical cycles still influence how present-day Maya practice indigenous religion and divination. 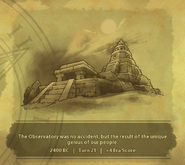 Historic Moment for building the Observatory