Recon unit of the Ancient Era

Wikipedia has a page called:
Okichitaw

The Okihtcitaw is a unique recon unit of the Cree civilization in Civilization VI: Rise and Fall. It replaces the Scout.

In the Gathering Storm expansion, the Okihtcitaw can upgrade to a Skirmisher.

The Okihtcitaw has the same

Combat Strength as a Warrior and greater maneuverability, making it ideal for both defense and scouting. What is even more important is that it starts with a free

Promotion, which will enable it to move freely over one difficult type of terrain from the moment it's trained! When chosen wisely, this

Promotion alone will grant it a massive speed boost; explore the prevailing terrain with other units before you churn out your first Okihtcitaw and choose whether to have it move freely over Hills or in Woods and Rainforests. Then the Cree will be able to explore their surroundings much faster than other civilizations, and reap the benefits of early discoveries. There is also a chance to receive free Okihtcitaws from Tribal Villages.

Don't rely too much on this unit, however - being a recon-class unit, the Okihtcitaw does not possess the Warrior's Bonus versus anti-cavalry and combat-oriented

Promotion. Therefore, in the grand scheme of things, the Okihtcitaw is more resilient against damage in the early game but in no way exceptional as a military unit, even when dealing with Barbarians. Furthermore, a huge downside of this unit is that it is 33% more expensive than the standard Scout. On Standard speed, this will translate to at least 2 more turns of production. Considering the chief purpose of a Scout is to explore the surroundings and its role will quickly become less of a priority, and the fact that the Okihtcitaw can never fully replace melee units in your army, it is not recommended you invest too much into this unit. All in all, a unique Scout that is more expensive than the standard one is not all that impressive, and hardly any other bonuses can justify building an army of Okihtcitaws. One is the standard number, two if you are being very generous.

Roughly translating to “warrior,” the okihtcitaw had a much more important role within Cree society than merely serving as combatants. The sons of chiefs, they protected the tribe when it traveled and kept order when it settled. They also policed buffalo hunts to ensure that no one hunter began before any other. The Cree considered these seasoned warriors incredibly brave and skilled in combat, a step above their peers—often charismatic and clever, allowing them to serve as effective leaders in times of war and peace. 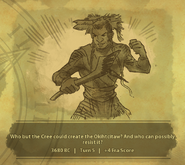