+2 Loyalty per turn in this city.

Tourism for each type of terrain (Snow, Tundra, Desert, Plains, or Grassland) in which at least one Swedish city is founded.
Limit of one per city. Tiles with Open-Air Museums cannot be swapped.

The Open-Air Museum is a unique tile improvement of the Swedish civilization in Civilization VI: Gathering Storm.

Tourism bonus per terrain type is substantial, making it worthwhile to spread out a bit to found cities on the various terrain types. This improvement does not count terrains and their Hills separately, so settling, for example, on both Snow and Snow Hills does not give you more

Culture. In other words, the maximum yield you can get is 10

This improvement urges Sweden to explore for city spots in all biomes. While it is easy to have a good city spot on Plains and Grassland, it is a lot harder to find one on Desert and Snow. For Desert, you can try to settle on the edge of a vast desert where you can still have access to fertile land, or on a Desert Floodplains tile, or in a vast open desert with a lot of Desert Hills tiles and then try to build Petra. It is substantially more difficult with Snow. Your best bet is either on a Snow tile adjacent to Tundra regions, or on a coastal Snow tile next to a river with a lot of sea resources. You can try to build the Amundsen-Scott Research Station later in this city. As for the Tundra city, it is not as easy as Grassland or Plains, but not as hard as Snow or Desert, since Tundra can still host a lot of resources, and also Woods, which can be made productive with Lumber Mills. As for the St. Basil's Cathedral, you have to choose if you want to maximize the yields by putting it in a Tundra city, or maximize the

Tourism output in your

Relic game by putting it in your Holy City with the Mont St. Michel.

The good thing is since Tundra, Snow and Desert spots are most likely subprime, they are almost always available. If there is a spot you want to settle, but is subject to strong foreign Loyalty, although the innate Loyalty bonus of this improvement does help a bit, you can try to form a Cultural Alliance with the nearby empire to negate their pressure.

Note that you do not need to unlock Flight for the

Tourism bonus to kick in, unlike every other

Tourism potential over every other cultural empires. Also, despite the tooltips saying that this improvement only takes into account cities "founded" by Sweden, it actually counts captured cities as well. Therefore, if you've managed to conquer some cities that were founded on certain types of terrain, you won't need to settle new cities there to get the maximum yield out of your Open-Air Museums.

There are a lot of things which are worth preserving and studying for future generations, but not all of them fit nicely into glass cases or hang well on the walls. You might want to preserve something as complex as a village or a farm to show how it would have worked as a system, or to show a way of life no longer widely practiced. It was in this spirit that the open air museum was created.

The first open air museum was King Oscar II's collection outside of Oslo, Norway, which includes a traditional Norwegian Stave Church (see the Stave Church entry for more information). The Skansen in Stockholm, Sweden, was founded in 1891 to preserve the declining traditions of Swedish rural life in the face of growing urbanization and industrialization. The term “skansen” has entered the lexicon as a shorthand for open air museums, especially those that focus on collecting historical structures.

Open air museums celebrate culture beyond that typically preserved in museums—honoring the culture of ordinary people, not merely the great and grand. A folk song or blacksmith's craft taught to a future generation surely serves to link a people to their past as surely as an operatic aria or an allegorical oil painting. Perhaps even more so. 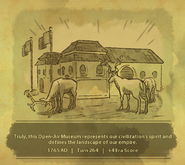