A district unique to the Gaul that is cheaper and available earlier than the district it replaces, the Industrial Zone. The Oppidum district is defensible with a ranged attack. When the first Oppidum is constructed the Apprenticeship technology is unlocked.

Production bonus if adjacent to a Quarry improvement or strategic resource.

Wikipedia has a page called:
Oppidum

The Oppidum is a unique

District of the Gallic civilization in Civilization VI. It replaces the Industrial Zone and is unlocked with Iron Working.

The following buildings can be constructed in an Oppidum:

The Oppidum is one of the most interesting unique

Districts in the game. Arguably its most powerful attribute is that it is unlocked at Iron Working instead of Apprenticeship. Iron Working only requires Mining and Bronze Working in order to research, making it very easy to rush. Contrast this to Apprenticeship which needs 6 other technologies to research. This lets the Gauls get a massive

Production advantage in the early game, perfect for conquest, expansion, or competing for any Wonders you may desire.

Another powerful bonus is that building your first Oppidum immediately unlocks Apprenticeship. While this technology is no longer necessary for building your Industrial Zone, it does give +1

Production to all of your Mines and unlocks the Workshop. This synergizes extremely well with the Gauls' incentives to build a lot of Mines and piles on to their already very strong early game

A more niche attribute of the Oppidum is that it gains Outer Defenses and a Ranged Strike like the Encampment. This is by no means weak, but considering you will want to prioritize spots that give the Oppidum a good adjacency bonus, you may not get as much use out of this as you would from a strategically placed Encampment. Ideally, in core cities where you produce military units, you would like both of these districts, and you would like them to be placed in opposite sides of the City Center to shield it from invasion. However, since your Encampment placement is not dependent on adjacency bonuses, strategize where you would place the Oppidum first and then place the Encampment on the other side of the city. Giving Victor the Embrasure title and assigning him to a city would allow it to perform up to 6

Ranged Strikes per turn: twice from the City Center, Encampment and Oppidum.

Despite all of these bonuses, the Oppidum has a large disadvantage in its adjacency rules. The standard Industrial Zone's adjacency rules allow for very consistent high adjacency with use of well placed Dams and Aqueducts. The Oppidum on the other hand, relies much more on luck, requiring either Strategic Resources or

Gypsum. This may work out in your favor, but considering you will only be able to see 2 Strategic Resources at the point you start making your Oppida, it may be difficult to find any locations that will give a higher adjacency than 4, while a standard Industrial Zone can easily reach this number by being flanked by well-placed engineering districts.

Overall, beside its defensive capability and the

Production cost discount every unique district has, the Oppidum and its

Production boosting ability does not scale too well into the late game compared to the standard version (and especially not compared to the almighty Hansa), as it is totally dependent on favorable map generation. Take advantage of your

Production spike quickly (when you build the first Oppidum and unlock Apprenticeship), as other civilizations can quickly catch up with you in

Production when they themselves research Apprenticeship.

However, after the April 2021 Update, the major focus of this

District gets shifted slightly away from being the

Production hub to being the fuse of the Gallic war cannon. With the introduction of the Man-At-Arms at Apprenticeship, the more important responsibility of the Oppidum is now to be the vessel that unlocks this Medieval unit when the game is still in the Ancient Era. You only need three technologies to unlock the Oppidum, Mining, Bronze Working and Iron Working, and that will be the exact first three technologies you research every game. Thanks to the Gallic starting bias, triggering the

Eurekas for Bronze Working and Iron Working is almost guaranteed every game. For the build order, after the first Scout like normal, get a Builder, then a Settler, and start building military units like Gaesatae or Slingers. After unlocking Bronze Working, put down an Encampment, and after Iron Working, start building your first Oppidum and then go back for Animal Husbandry (to reveal

Horses) and Archery (for Archers). Upgrading Gaesatae to Men-At-Arms in the Ancient Era is costly, especially for a civilization with no extra

Gold to upgrade Slingers into Archers instead. With the generous early

Production from Mines, Apprenticeship and the Oppidum, hard-building Men-At-Arms is not too onerous. With this strategy successfully pulled off, the fact that the

Production bonus of the Oppidum scales poorly as the game progresses hardly matters anymore. Its job is to unlock an incredibly advanced military unit for its time and supply enough of a

Production spike to train some of that unit in a reasonable amount of time, and it exceeds any expectation in fulfilling that role.

Alternatively, a Gaul player can go for a slightly less risky but also less powerful build by waiting on the Oppidum. By detouring for Archery (and perhaps Writing) before Iron Working and doing an early Gaesatae and Archer rush, Gaul can gain some cities and establish dominance in the surrounding area before upgrading to Men-At-Arms. This allows for the Gallic economy to be better prepared for the high

Horses to allow for better adjacency bonuses on your Oppida. However, holding Men-At-Arms off for too long will have the opposite effect, making the infamous Gallic power spike less effective as other civilizations may unlock other medieval units such as Crossbowmen in the meantime. The best strategy is probably a compromise, researching Archery before Iron Working and taking a few cities from a weaker neighbor before gaining Men-At-Arms, though this will depend heavily on your game.

It is worth noting that despite being a defensible

District, the Oppidum does not exert a zone of control.

Oppidum simple means “settlement” in Latin, but in practice it referred to a walled urban settlement of a small town in Rome’s provinces – especially Gaul, and as such marks the first real cities in Europe north of the Alps. A classic oppidum was a combination of city and fort. Previously, citizens lived outside of protective walls, whereas armed soldiers or nobles had a hill fort: a high, fortified position. With an oppidum, economic and productive activity could occur in relative safety even with enemies nearly. The walls, too, made a separation between city-dwellers and rural residents, and allowed the former to feel a little sense of superiority over the latter, even if these “cities” were quite small by our – or even Roman – standards. 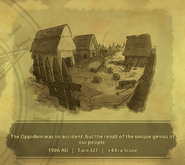