+25% combat experience for all cavalry and siege units trained in this city.

Movement for all cavalry units trained in this city.
Cannot be built in an Encampment district that already has a Barracks.

The Ordu is a unique building of the Mongolian civilization in Civilization VI: Rise and Fall. It is built in the Encampment district and replaces the Stable.

The Ordu is indispensable for helping Mongolia raise a strong and dominant cavalry force. All cavalry units, including the ranged cavalry Keshig, trained in a city with an Ordu receive extra XP and

Movement, allowing them to reach the front lines of the battlefield quickly and earn

Promotions that will make them deadlier with each skirmish.

Simply translated, “ordu” means “palace tent.” However, an ordu was something much more than just a simple tent—it was the center of the tribe for the nomadic Mongolians. 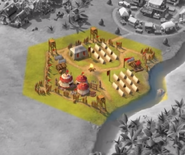 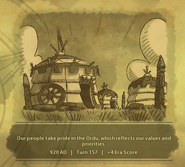 Historic Moment for building the Ordu
Community content is available under CC-BY-SA unless otherwise noted.
Advertisement