Ethiopian unique Medieval era light cavalry unit. Stronger and greater sight than the Courser that it replaces. Receives no

Movement penalty from moving in Hills.

The Oromo Cavalry is a unique light cavalry unit of the Ethiopian civilization in Civilization VI.

In the Gathering Storm expansion, the Oromo Cavalry replaces the Courser and requires 10

Not exactly the most memorable or flashy unique unit, the Oromo Cavalry is the most "quiet" piece in the Ethiopian arsenal. It is only slightly stronger than the standard Courser, with a conditional

Combat Strength bonus from Menelik II's ability. However, it does have better maneuverability in hilly terrain and higher

Sight than a regular Courser. Coupled with the fact that this is a light cavalry unit, it shines brighter working as a scout for imminent threats approaching your border, or as a "spotter" (i.e. a unit that works solely to provide vision and intel on the enemy's army) and pillager in aggressive conquest, rather than a true militaristic unit. Overall, even when Ethiopia can compete well on the domination path thanks to their outstandingly high

Faith generation and Theocracy or the Grand Master's Chapel, it is definitely not because of this unit. The Oromo Cavalry is not crucial in any Ethiopian strategy; you can rely exclusively on Knights to defend or conquer if you have more abundant

Horses and there are not any major consequences for that.

The word “Oromo” refers to the dominant ethnic group in Ethiopia, making up about a third of the total population. The Oromo at times had their own kingdom, language and religion (although in present-day Ethiopia they are evenly split between Muslims and Christians). During the First Italo-Ethiopian War, when Italy attempted to seize Ethiopia as a colonial possession, the Ethiopian emperor Menelik used Oromo cavalrymen to devastating effect, especially in the decisive Battle of Adwa.

The Oromo cavalry were not true cavalry, but mounted infantrymen, meaning that they did not fire weapons from horseback, but would gallop towards the Italians, dismount, and then fire. With their lion’s-mane headdresses and fierce reputation, they became one of the most feared military units of the era. During the Italian invasion, a rumor spread around the Italian camps that Oromo cavalry (whom the Italians called “Galla” – a word that was seen as offensive by the Oromo) would castrate the bodies of enemies that held weapons – a rumor that caused many Italians to toss aside their guns the moment that the Oromo began their charge. Italian soldiers reported their compatriots turning their guns on themselves rather than facing the Oromo. One report depicts a lone Italian survivor of an Oromo attack, dazed out of his mind, unable to say anything but “Galla cavalry. Galla cavalry. Horror. Horror.” 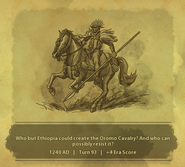