Districts. Conquering a city doesn't cause that city to lose

Amenity and +4 Loyalty per turn for cities not founded by the Ottomans.

The Ottoman people represent a civilization in Civilization VI: Gathering Storm. They are led by Suleiman, under whom their default colors are white and dark green.

The Ottomans' civilization ability is Great Turkish Bombard, which allows them to train siege units 50% faster and gives their siege units a +5

District defenses. In addition, cities the Ottomans conquer do not lose

All of the Ottomans' assets are built around solely one purpose: war. They are adept at harassing enemies at sea as well as conquering on land, and also experts at keeping their newly gained citizens happy and loyal.

This is a rather strange leader ability, as it does not offer any particular empire-wide bonus like others; instead, Suleiman gives his empire two (well, sort of) unique units.

This is the main instrument of conquest for the Ottomans, so even though the civilization's unique unit is a naval unit, their true domination prowess is on land. The Janissary is a Musketman replacement, but stronger and most importantly, much cheaper. Its one downside is that a Janissary trained in a city originally founded by the Ottomans will cost a

Population, similar to a Settler. There is, however, a way to circumvent this, since you do not want to keep losing

Population and may not want to start your conquest before the major power spike. Read more about how to use the Janissary here.

Suleiman also comes with a unique Governor, Ibrahim, who is an expert in both military and diplomacy. He only needs 3 turns to be established in a city. In war, he can speed up unit training or strengthen the defense of a city. He can also provide a large combat bonus when attacking cities. In peace, he is the only Governor that can be sent to other civilizations to help them in times of need, or to stop them from spreading their Loyalty pressure to flip your newly conquered cities. For whatever purpose, Ibrahim is a crucial piece in Suleiman's toolkit to make the Ottomans an absolute powerhouse in domination.

This is the only bonus in the game that helps speed up the construction of siege units specifically, and it stacks with Ibrahim's first title. Since siege units are always the prime target to get focus fired by districts and enemy units in wartime, the Ottomans' get stronger and more siege units can overwhelm a city quickly. The most important aspect of this ability, however, is that all conquered cities get to keep all of its

Population, even comes with a Loyalty and

Amenity bonus, allowing them to swiftly become integrated into your empire. With intact high

Population, Loyalty bonus and Ibrahim, it is impossible to flip back cities using Loyalty. To stop the Ottoman snowball, enemies may have to engage in a reconquest war against an empire at its peak, or lose an important part of their territory forever.

Following the changes to pillaging in Gathering Storm, constant coastal harassment is now a viable strategy that does not require a lot of

Production investment to have a large standing army, and the Ottomans have just the perfect vessel for that. The Barbary Corsair thrives on being an incessant annoyance more than a direct combat unit, as it has everything you can ask for to fulfill its role (very much like the Ottoman Sipahi in Civilization V): cheaper with standard invisibility for naval raider units, pillaging without costing

Movement, and most importantly, available before other civilizations unlock the standard Privateer to counter it. It is a rare unit that can actually benefit from the much undervalued Great Lighthouse Wonder and Great Admirals, since what it needs to do its job is not

Combat Strength, but only

Movement. This unit alone makes the Ottomans the bane of every civilization that has coastal tile improvements or enjoys bonuses from coastal districts and settlements, such as the English, Australians, Dutch, or most notably, Indonesians. Try to make the most of the Medieval Era before other civilizations gain access to Privateers - combined with policy cards like Raid and Total War, you will be rewarded with a constant income of

Gold and healing to sustain through any damage thrown back your way.

Anything a warmonger wants, the Grand Bazaar offers. With faster resource accumulation and an extra

Amenity per Luxury resource at a cheaper cost than a regular Bank, the Grand Bazaar adds more fuel to the conquest machine of the Ottomans. Most importantly, this building is available at just the right time to increase

Niter accumulation for the Janissaries and Bombards, bringing the Ottoman army into its Renaissance peak.

In details, the Grand Bazaar boosts resource accumulation speed based on the level of Strategic Resource diversity in the city. For example, if a city has 3 sources

Niter improved, all mines will receive only +1 resource per turn faster, since the level of Strategic Resource diversity is 1. If later you improve one

Oil source with an Oil Well, all improved

Oil sources will accumulate +2 resource per turn faster, regardless of the number of Mines and Oil Wells present. Similarly, extra

Amenities from Luxury Resources count the number of Luxury types, not the actual number of improvements. Resources, Strategic or Luxury, that are outside the 3-tile workable range or placed under a

District count towards diversity and benefit from this building as if they were improved with their respective improvements.

Overall, this is an incredible unique building, especially when you consider how underwhelming the Bank is compared to other tier 2 buildings in other

Districts. The construction of the regular Bank is often delayed until much later in the game since the building is neither strong or important, but the Ottomans should definitely put more emphasis on their Grand Bazaar. And the best thing about the Grand Bazaar is that it is 70

Production cheaper than the standard Bank. Standing at approximately three quarters of the

Production cost of the Bank, the Grand Bazaar represents the largest discount of all unique buildings in the game.

A Domination Victory is the Ottomans' best option. They'll be at their strongest during the Renaissance Era, though their civilization ability will continue to benefit them as they research Steel and Guidance Systems and unlock more advanced siege units.

For more than six centuries, the Ottoman Empire ruled the crossroads of Europe, Asia, and Africa, coming to rule a massive empire that stretched from Persia to the borders of Hungary and Poland, through the Middle East and across Northern Africa. Rising into power in a vacuum left behind by the Mongol invasions and the sweep of the Black Death, the Ottomans remained an empire until the aftermath of the first World War. During that time they were central to the political events in Europe and the Near East, ruling a fractious, multi-ethnic, multi-lingual, multi-religious empire.

The Ottoman empire was founded by Islamic warriors, fighting in the service of Seljuk Persians against the Byzantines. These semi-nomadic people from Central Asia settled in Anatolia, and after the Mongol Empire had swept aside the Seljuks, Osman I founded the Ottoman dynasty, originally ruling a small patch of Anatolia around Bursa. It was a precarious position, bordered by Turkmen rulers on one side and the still-formidable Byzantines on the other. But Central Asia was in a state of political and cultural flux as a result of the Mongol invasions, and the Ottomans were successful in attracting people willing to fight for an expansion of their territory at the expense of the Byzantines.

The Ottomans chipped away at Byzantine-held territories in the Balkans and modern-day Turkey. Likewise they were able to make military and political gains at the expense of rival Islamic powers, like the Seljuks and Turkmen, coming to rule most of Europe south of the Danube. Sultan Mehmed II conquered Constantinople in 1453, marking the end of the Byzantines and the last link to the Roman Empire. Sultans Selim I and Suleiman I brought the empire to its height of territorial dominance, adding Egypt, the Levant, North Africa, Mesopotamia, and Europe as far as Hungary, Poland-Lithuania, and Russia.

Suleiman's reign is seen as the high water mark for the Ottoman Empire, a golden age marked by military conquest, political and legal reform, monumental construction, and patronage of the arts and crafts. Life in the Ottoman Empire was governed through a complex intermix of secular codes, Islamic jurisprudence, and regional custom, and social ranks and hierarchies. The Janissary soldiers are an illustrative example of this mix of practices. Originally these were Christian-born boys who were consigned to the Ottoman state as tax or tribute, converted to Islam and raised in the strict, martial life of a soldier. Janissary life was governed by strict laws and discipline. They were forbidden to marry or own significant property, and were intensely loyal and considered the elite infantry of the empire.

The Ottoman empire was an integral part of the European political calculus of wars and alliances for centuries, sometimes allying with, and sometimes fighting against the various nations. Even for nations that did not actively fear Ottoman invasion, there was a healthy respect for the military and economic power of the empire. For most of the Renaissance and early Industrial period, there was a simmering conflict between the Islamic Ottomans and the Christian Europeans, with both sides choosing to emphasize the religious difference during times of conflict, while downplaying the difference during eras of peace.

A period of slow decline followed the reign of Suleiman, as subsequent Sultans were unable to engage as effectively with the business of directly administering as sovereign. Military reversals followed, like the naval defeat at Lepanto in 1571. Still, the empire proved resilient enough to persist for centuries, and Ottoman armies lay siege to Vienna multiple times, with the last of these, in 1683, representing the last time Europe was seriously threatened by the empire's expansion.

World War I marked the fall of the Ottoman Empire. The Ottomans backed the Central Powers against the Entente, which proved disastrous for the nation. Ancient institutions had not reformed sufficiently to allow for political recovery. Rising Turkish nationalism and movements for independence throughout the empire splintered it further. The Young Turks, under Mustafa Kemal, created a Turkish republic in 1920, with control of the remaining Ottoman territories being divided amongst the victors.

The Ottoman Empire is remarkable for many qualities: Its military conquests, its successful unification of much of the Islamic world under a single political entity, and the qualities of its arts and architecture. Rising as it did from the plague- and invasion-shattered world at the crossroads of three continents, its institutions were durable and flexible to face centuries of challenges.

* The name "Ichiro" appears twice in the XML files. 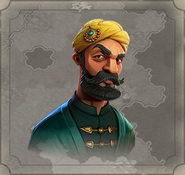 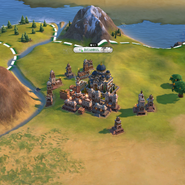 Ottoman capital in Classical Era
Add a photo to this gallery 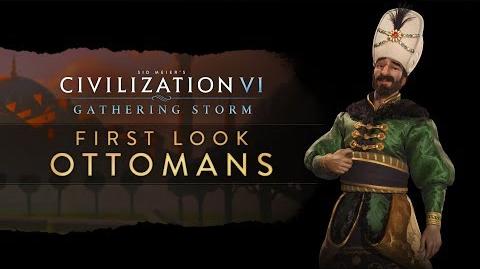 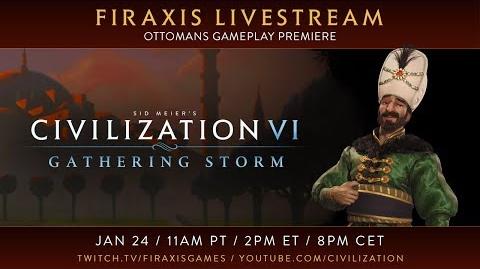 Retrieved from "https://civilization.fandom.com/wiki/Ottoman_(Civ6)?oldid=275084"
Community content is available under CC-BY-SA unless otherwise noted.