Ranged unit of the Ancient Era

Nubian unique Ancient era unit that replaces the Archer. Stronger than the Archer with extra

Wikipedia has a page called:
Pítati

The Pítati Archer is a unique ranged unit of the Nubian civilization in Civilization VI. It replaces the Archer.

The Pítati Archer is a superb replacement for the Archer: it's stronger, quicker, and earns

Promotions 50% faster thanks to the Nubians' civilization ability. Its one drawback is its higher

Production cost, though the Nubians' bonuses toward training ranged units help offset this.

All things considered, the Pítati Archer is hands down the best ranged unit until the Medieval Era:

The Nubians can gain a military advantage early on by training several Pítati Archers, which they can use to launch lightning raids on Barbarian outposts and unsuspecting neighbors.

Pítati Archers become obsolete with Ballistics, though they'll be replaced by Crossbowmen long before this technology is discovered.

The skill of Nubian archers was long respected and feared along the Nile. These soldiers from the Land of the Bow were a thorn in Egypt’s side for millennia—until the Egyptians solved yet another problem by throwing money at it.

Thus came about the pítati, Nubian mercenaries paid well to guard the interests of their benefactors, be they Egyptian or Nubian. These highly mobile archers wore little armor and carried bows typical to the region. However, their distinctive thumb rings greatly reduced fatigue, and malachite facepaint applied below their eyes allowed them to loose arrows with accuracy while firing into the sun. 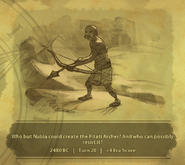