A Māori unit occupying a Pā heals even if they just moved or attacked.

Wikipedia has a page called:
Pā

The Pā is a unique tile improvement of the Māori civilization in Civilization VI: Gathering Storm. It is built by the Toa and must be on a Hills tile.

In the Zombie Defense game mode, the Pā deals minor (10 HP) damage to hostile units passing through it.

The Pā is exactly the same as the Fort, except for the healing for Māori units using it.

Using the Pā effectively is the same as using Forts effectively. Place them along the fringes of your territory, especially along borders with other civs. Preferably, you do not want to place a Pā on an open and isolated tile, since the unit occupying it can be swarmed by enemies. It is a good idea to place this improvement on a strategic spot against a Mountain range where you cannot be ambushed from all sides, or on the escape route between multiple enemy cities to cut off their retreat and quickly heal your units while moving from one city to another.

Remember, similar to a Fort, if the enemy manages to occupy your Pā, they will receive the fortification bonus. However, the Pā will not provide extra healing to the enemy.

The Pā can only be built on Hills terrains, and similar to other Fort-like improvements, the tile cannot contain any feature. While the Toa can clear features, the action will consume its

build charge, so remember to escort a Builder with you just in case you need to build this improvement on a strategic hill that happens to be covered with a terrain feature. Also note that you can only clear features inside your own territory.

The healing aspect functions similarly to the Mamluk's healing ability:

The Maori constructed sophisticated hilltop fortifications, called Pā. These consisted of clearing and terracing a hilltop, erecting a palisade wall (or series of palisades), and constructing earthworks, foot storage pits, and water sources. Some Pā were large enough to support limited agriculture at their heart. A Pā conveyed a great deal of mana on the iwi which constructed it, in much the way a castle conveyed power to the nobility of feudal cultures.

During the Maori wars with the British, the Pā of the North Island were centers of strong resistance for the Maori. In response to the introduction of gunpowder weapons, the Maori quickly modified their Pā design to include interlocking fields of fire for the defenders, and soft flax padding on the palisades that would dissipate the damage from bullets and shells. Only with heavy artillery could the colonial troops crack a Pā.

Pā represent ingenious use of local resources to build strong defenses. The Maori quickly adapted the design of the Pā as new European weapons were introduced to the island, rapidly recapitulating the history of European fortification development in only a few generations on their own. There are many old Pā sites still visible around New Zealand today. 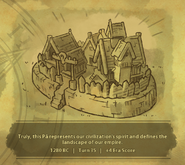 Historic Moment for building the Pā