The P-51 Mustang is a unique air fighter unit of the American civilization in Civilization VI. It replaces the Fighter.

In the Gathering Storm expansion, the P-51 Mustang requires 1

Aluminum to train and 1

Aluminum per turn to maintain.

As the only unique air unit, the P-51 Mustang allows the Americans to rest easy if a civilization with a strong air force tries to pick a fight with them. It receives a combat bonus against other air fighter units, on top of its superior

Promotions that make it sturdier against anti-air units or more powerful against bomber units and land units. In addition, its superior flight range allows it to deploy farther away from cities, effectively extending the maximum

Range of the unit from the standard 13 tiles to 15 tiles.

The P-51 Mustang, as an air unit, is vulnerable to Battleships and Anti-Air Guns. But thanks to its strength and XP bonuses, it can more easily stand up to enemy units, and even face Brazil's fearsome Minas Geraes if you have enough of them with the right

Air fighter units, including the P-51 Mustang, cannot be deployed to tiles in the fog of war or in enemy territory even when the tile is within the deploy (

Movement) range of the unit.

With the coming of WW2, it was quickly apparent that America’s fighter aircraft were obsolete and not-up-to-snuff against the German and Japanese fighters, so the United States sold the old planes to the British and Russians and developed the P-51 “Mustang.” Designed to specifications supplied by the British Purchasing Commission as a long-range, high-altitude, single-seat fighter and fighter-bomber and bomber escort – able to outperform the best Luftwaffe fighters above 15,000 feet and outlast the Japanese fighters – the prototype was unveiled in September 1940. By 1943, Mustangs were in service on every American front, knocking the enemy out of the skies with abandon. Even with the advent of jet fighters, the old warbird served during the Korean War as a fighter-bomber. Afterward, those that weren’t scrapped were sold as surplus, most of which were converted for the obscure sport of air racing or restored for the obscure spectacle of air shows. 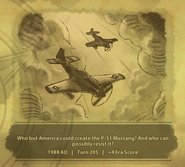