"Hidden in the glorious wildness like unmined gold."
– John Muir

Wikipedia has a page called:
Paititi

Païtiti is a three-tile impassable Natural Wonder in Civilization VI that was added in the Maya & Gran Colombia Pack. Each Wonder tile provides +2

Gold and 2 Appeal to adjacent tiles. Cities that own tiles of Païtiti gain a +4

Gold bonus on their international

In Civilization VI: Rise and Fall, discovering Païtiti grants +1 Era Score, or +3 Score if the player is the first to do so.

Simply put, Païtiti is a better version of both Piopiotahi and the Cliffs of Dover, giving more total yields on more tiles, as well as not being locked next to coastal tiles. Lastly, try to split up the tiles so you can potentially have three cities getting +4

Gold bonuses on each international

Trade Route effect from Païtiti can apply to any city that owns one of its tiles, regardless of how far away that city is. This allows cities which might be 4-5 tiles or farther away from Païtiti to still benefit from its effect. Be sure to allow cities in this situation time to grow, as once another city owns those tiles it can no longer be swapped back to a city that is 4-5 tiles away.

Humans, ever on the search for “lost cities,” particularly Lost Cities of Gold, tend to gravitate towards legends of great wealth and prosperity. Like most mystical cities, the prevailing thought is that Païtiti exists deep within the unknown wilds just waiting to be discovered. The Inca saw the city as the last safe haven from the Spanish Conquest. However, others (predominantly non-Incan explorers from the 1600s) perceived the city to be a treasure trove just waiting to be plundered. The legends of Païtiti’s wealth were perpetuated by the attack of Francisco Pizarro and his murder of Atahualpa, the last ruler of the Inca. He searched for the remaining gold said to exist, but Pizarro never received all of the alleged gold he tried so desperately to gain from his conquest. Despite multiple expeditions into the “unknown” jungles of the Amazon, no explorer has yet discovered the location of Païtiti. 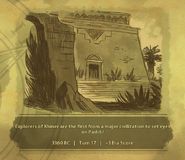