Culture for every adjacent Holy Site and Theater Square
+1

Gold for every adjacent Commercial Hub and City Center
+1

The Pairidaeza is a unique tile improvement of the Persian civilization in Civilization VI.

Districts, thus encouraging close-packed city layouts. It also increases the Appeal of all surrounding tiles by 1, which can create ideal spots for Neighborhoods, Seaside Resorts, and National Parks. If the Persians choose the Earth Goddess pantheon, the Pairidaeza's Appeal bonus will translate into a meaningful

Faith income and potentially allow them to simultaneously pursue Domination, Cultural, and Religious Victories. Pairidaezas are particularly useful when placed on Hills and inland tiles adjacent to coastal flatland, on which Seaside Resorts can then be placed for rich

A pairidaeza is a specific style of garden consisting of cultivated land within an enclosure. Also known as a “paradise garden,” the pairidaeza is thought to originate in the time of the Assyrian Empire. Its rectangular construction serves to contrast the external wildness of nature with an ordered and beautiful garden. Water was often an important element of their construction—ponds, canals, or even fountains flowed freely within the walls.

As a tool of state, they were invaluable in flaunting a kingdom’s ability to bring life to an area that would otherwise have none. The Achaemenid dynasty melded the pairidaeza with their royal hunting parks, a not so subtle way to show their command over both their empire and the natural world within it. 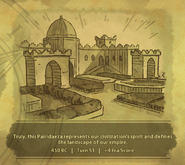 Historic Moment for building the Pairidaeza
Community content is available under CC-BY-SA unless otherwise noted.
Advertisement