Food to all tiles adjacent to a source of fresh water.

Wikipedia has a page called:
Canal

The Palgum is the unique building of the Babylonian civilization in Civilization VI. It is built in the City Center, replaces the Water Mill and is unlocked with Irrigation.

The Palgum is a very nice upgrade to the rather underwhelming and underused Water Mill. Beside the 1 extra

Production compared to the Water Mill, the Palgum provides 1

Food to all tiles next to a source of Fresh Water, including rivers, lakes and oases. The efficacy of this building is no longer heavily tied to random map generation like the Water Mill, since now you can seek out locations on a river where there are many Fresh Water sources, and grow your cities incredibly quickly. And don't underestimate the

Production is huge in the Ancient Era, especially for a building that does not require another

Production in Vanilla and Rise and Fall, while being almost 2.5 times as expensive as the Palgum and requiring the Industrial Zone.

Also, the Palgum is only one of the two City Center unique buildings, meaning it is not dependent on a specific type of

District and can be built everywhere, as long as the city satisfies one very simple placement requirement. The Valletta city-state, therefore, has a powerful synergy with Babylon, since it allows them to instantly purchase the Palgum with

Faith, making it easier for new cities to grow immediately after settling.

It is worth noting that the Palgum is unlocked with Irrigation rather than Wheel like normal. For most civilizations, this is barely a distinction, but because of the way Babylon's ability interacts with technology it ends up being unlocked much sooner, since you will nearly always spawn next to and prioritize improving

Maize, thanks to your starting bias. Considering Babylon's outstandingly low

Science per turn and the fact that they can easily catch up with their civilization ability, they are not under pressure of having to settle almost immediately after the game starts. Indeed, they can wander around for the first few turns looking for an ideal spot with a Farm-able resource to instantaneously unlock Irrigation and get their unique building up and running in no time. It is actually quite viable to start training a Builder to put down a Farm on a resource, then move on to build the Palgum immediately, so that your

Capital will receive this huge boost of

Production; however, by doing so, you will have to forgo early exploration.

Mesopotamia is a land with a complicated relationship with water. Between the dry desert and the flood-prone Tigris and Euphrates, the Babylonians had to learn how to control their rivers. And control them they did, even channeling the flow through palgum – small-scale canals – to feed elaborate gardens. While the Hanging Gardens of Babylon have not been as well documented as historians may have hoped, at Nineveh, the Assyrian king Sennacherib built a luxurious garden fed by aqueducts and elaborate canals – often the same waterway at different points, cutting through mountains and rising over canyons - that allowed for exotic trees such as ebony and rosewood to grow within the palace. These canals were reinforced by great limestone blocks and controlled by specialized sluice gates. The King was proud of these – he inscribed, “over deep-cut ravines, I spanned a bridge of white stone blocks. Those waters I caused to pass over upon it.” The Yazidi ethnic group in Iraq kept up this tradition of building elaborate aqueducts and canals well into the 20th century. 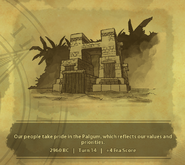 Historic Moment for building the Palgum
Community content is available under CC-BY-SA unless otherwise noted.
Advertisement