"The Pantanal is the most complex intertropical alluvional plain of the planet and perhaps the least known area of the world."
– Aziz Ab'Saber

Wikipedia has a page called:
Pantanal

The Pantanal is a four-tile passable Natural Wonder in Civilization VI. The Pantanal appears as a Marsh on Grassland or Plains tiles. Each Wonder tile provides 2

Food. The Pantanal increases the Appeal of adjacent tiles by +2.

Like normal Marsh tiles, the Pantanal's tiles have a

Movement cost of 2, and reduce the

Combat Strength of defending units by -2.

In Civilization VI: Rise and Fall, discovering the Pantanal grants +1 Era Score, or +3 Score if the player is the first to do so.

The Pantanal does not appear to grant any bonuses that would be normally granted to Marshes, such as the Lady of the Reeds and Marshes pantheon bonus.

Each Pantanal tile has a yield of 2

Food. Since Culture is often hard to generate early in the game, incorporating natural wonder tiles can provide a vital head start through the Civics tree.

Unfortunately, as with all natural wonders, the Pantanal tiles cannot be developed or improved. Because of this, natural wonders may be more of a hindrance than an asset later in the game - a natural wonder in the heart of a City can spoil adjacency bonuses for Farms and districts. In general, passable wonder tiles are significantly better than an unimproved tile of any kind, but are often less productive than an ordinary tile with an improvement or a district.

The Pantanal is considered the world’s largest tropical wetlands, spreading out to as much as 195 thousand square kilometers (about 75 thousand square miles) of water, bog, quagmire, and muck. It is, of course, home to an extremely diverse bio-system of flora and fauna, including some 1000 species of birds and 480 species of reptiles. For centuries, the Bororo lived happily among these, but by the end of the 1800s they were decimated by disease and Brazilian explorers, slave traders, prospectors, and settlers. Now several Brazilian cities are located within the Pantanal. 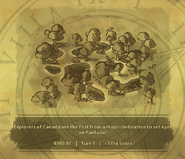