Armored unit of the Atomic era

Wikipedia has a page called:
Panzer

The Panzer is the German unique unit, replacing the Tank. It is both stronger and faster than the Tank. It also can move after combat, allowing it to blow huge holes in enemy lines and then barrel through before the enemy can repair the gap.

Thanks to the Panzer, the Germans gain an important advantage in late-game battles. Look to enhance this by developing Cavalry earlier, then upgrading it all the way to Panzers. This way you'll gain not only the natural advantages of the unit, but also all previously acquired promotions, thus creating a terrifyingly effective battlefield monster! Use concentrated Panzer attacks to crush the enemy lines, then heal the wounded units while moving the rest of your army into position and chasing down any remaining long-range enemy land units, like Artillery.

At the start of World War II, the German Panzer tanks were not markedly superior to their French or Russian counterparts - quite the opposite, in fact. The German "Panzers" (tanks) were inferior in firepower and in armor. What the Germans did have, was military geniuses like Heinz Guderian, Panzer Corps commander and one of the architects of the blitzkrieg, or lightning-assault doctrine of concentrated tank warfare. In France, this doctrine was astonishingly successful, as massed armies of tanks blew apart the French tanks, which, though superior in weaponry and armor, were dispersed among the French infantry and had no chance against the massed German firepower. The German Panzers had equal success early in the war against the Soviet Union, until the USSR figured out how to create and organize their own tank armies. 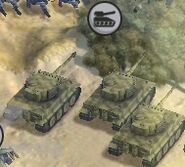 Panzers, which replace the Tank when Germany builds it