The Pike and Shot is a Renaissance Era anti-cavalry unit in Civilization VI: Rise and Fall. It upgrades from the Pikeman (or its replacements).

In addition to being as strong as a Musketman, the Pike and Shot requires no strategic resources to produce, which makes it an invaluable frontline unit for civilizations without access to

Niter. It only costs 10 more

Production than a standard Musketman; however, a Musketman will gain a small (+5

Combat Strength) advantage against a Pike and Shot in a face-off. Players who have a large number of Pikemen and enough

Gold to upgrade them should do so as soon as the Pike and Shot becomes available, as it will make quick work of Knights and Coursers. It's also a good counter to Cavalry and reasonably effective against Cuirassiers.

The Spanish armies developed a well-rounded defensive tactic after their disastrous experience at the Battle of Seminara. Composed of pikemen and arquebusiers (infantry with early firearms), the unit moved as a cohesive block: pikemen at the center, with groups of arquebusiers surrounding them. Arquebusiers could strike enemies in range, and then fall back behind the “curtain wall” of pikemen when threatened by enemy infantry or cavalry. It worked out well for the Spanish arquebusiers, who could load their notoriously complicated armaments with minimal fear of horse trampling. 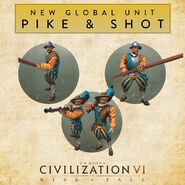