Pingala, otherwise known as The Educator, is one of the Governors introduced in Civilization VI: Rise and Fall. He is a master at boosting a city's

Culture output and a key player in the space race.

Pingala is focused on the cultivation of

Cultural endeavors in the city. He is also quite skilled in the attraction of

Great People to his city.

Pingala is a useful Governor for any civilization seeking any victory type. Players can use his Connoisseur and Researcher promotions to make up for any weaknesses their civilization may have in producing

Culture, or bolster the strengths they may have in both. Alternatively, Pingala can be placed in a city with a great deal of

Districts and their accompanying buildings to make the best use of his Grants promotion. Finally, in late game scenarios, his Arms Race Proponent and Space Initiative promotions should have him placed in cities with very high

Production. When playing with Gathering Storm, Pingala's Arms Race Proponent promotion is given to Victor, the Castellan, and replaced with Curator, a highly valuable promotion for Culture Victories, which doubles

Tourism from all Great Works in the assigned city.

Educators are more than teachers - they are guardians of the knowledge of ages, and dedicate their lives to the preservation and dissemination of information. As education has become more widespread and comprehensive, so too has the educator's role in finding new and effective means of transmitting the collected wisdom of ages to their students. 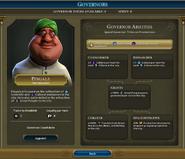