"But as I headed into the heart of New Zealand’s fiordland that same child-like feeling, long lost, of pure unadulterated awe came rushing back. I knew the road to Milford Sound was good – but this good?"
– Darroch Donald

Piopiotahi is a three-tile impassable natural wonder in Civilization VI. Piopiotahi may be found on Grassland and Plains tiles. Its tiles provide +1

Gold, and +2 Appeal to adjacent tiles.

Despite its appearance, Piopiotahi is not considered a Mountain in-game.

In Civilization VI: Rise and Fall, discovering Piopiotahi grants +1 Era Score, or +3 Score if the player is the first to do so.

Gold to adjacent non-wonder tiles (see diagram). However, as with all impassable wonders, the individual wonder tiles of Piopiotahi offer no benefits, and cannot be developed or improved. Piopiotahi is usually most effective when it is near the outskirts of a city (or even slightly beyond its borders), since the wonder tiles themselves are functionally dead space. If a city is strategically placed in this fashion, it receives the adjacency benefits of the wonder without sacrificing valuable space.

Note that the wonder tiles can be incorporated into National Parks - if a player wishes to found a Park, then it may be more efficient to place the city nearer the wonder.

Piopiotahi, known by settlers as Milford Sound, was named by Maori after the now extinct piopio bird - is a magnificent natural fjord on the coast of Te Waipounamu - the South Island of New Zealand. Carved by glaciers, the New Zealand fjord’s cliffs rise vertically from the dark waters while waterfalls fall as much as 1000 meters down the faces. Ignored by early explorers such as Captain James Cook, the fjord was given its English name follwing an obscure spot in Wales by the first to sail into it. In 1888 the MacKinnon Pass was located, giving access to the fjord along the Milford Track, one of the best walking trails in the world. Now as many as three-quarter million visitors a year tramp and sail about the sound, making it the most famous tourist destination in the country. 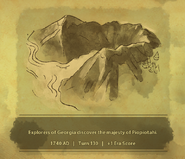