Pirates!: Live the Life is a remake of the 1987 game, and the gameplay is basically the same. It removes elements such as sun sighting but adds a ballroom dancing mini-game and an improved turn-based land combat system. The game includes sailing, trading, naval battles, sword fighting, and sneaking segments, and features nine historical pirates who appear as NPCs. Each one is based in a Pirate Haven and has a buried treasure for the player to find, and defeating him earns the player his plunder and ship and increases the player's score. 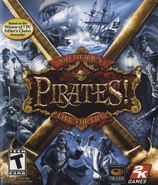