Food for every adjacent Polder, increasing to +2

Food for every adjacent Polder (with Replaceable Parts)
+1

Production for every adjacent Polder (Req.

Movement cost of tile to 3.

Wikipedia has a page called:
Polder

The Polder is a unique tile improvement of the Dutch civilization in Civilization VI: Rise and Fall. It must be built on Coast or Lake tiles with at least three adjacent land tiles.

The Dutch Polder in Civilization V and Civilization VI share pretty much the same concept: a robust amount of yields with incredibly strict placement requirements. Civilization VI's interpretation of this improvement pushes it even further toward the two extremes: it has the strictest placement rule in the game, yet it has very high base yields, scale well with technologies and civics, and can easily feed into each other's yields if you manage to build a series of Polders next to one another.

Polders need to be built on Coast or Lake tiles with at least 3 adjacent land tiles. Generally, you will have more luck with Lakes than the coast; since Lakes are naturally enclosed bodies of waters, they have an easier time satisfying the rule. Earlier in the game, spend some time exploring your surroundings for potential Polder spots. As your starting bias favors rivers over both Lakes and Coast, you most likely won't spawn with any such spot in sight. Ideally, you want to put Polders wherever possible, unless that is a spot reserved for a strong Harbor, or used for the Huey Teocalli, since the Netherlands is the only civilization that can take full advantage of Lakes.

To complicate this placement even further, Mountains, in Civilization VI, are a base terrain that is neither land nor water, so Mountains next to the coast and lakes do not count toward the 3-land tile requirement. For this reason, coastal and lakeside Mountains will effectively block Polder placement, especially in enclosed lakes which deceptively look like Polders can be built there.

Fortunately, unlocking Polders requires all the civics you will want to beeline regardless as the Netherlands. In order to reach Guilds, you need Feudalism, something everyone wants to beeline, and Civil Service, the civic that allows Alliances. Considering Wilhelmina puts a heavy emphasis on

Trade Routes, this civic is also critical. On top of that, the Netherlands, with Wilhelmina and their civilization ability, is guaranteed to have a very good early

Always keep this in mind, rivers are the Dutch's best friend, as explained with great details under the Grote Rivieren section. If there is a city spot with both rivers and potential Polders, obviously that spot should be prioritized. If it is a spot where Polders can be built but cannot make use of rivers, there should be more considerations to be had. If it is on the coast where your ships can reach, wait until you unlock your unique unit, it is strong enough to claim it back for you if another civilization settles there. If that spot is beside an inland lake, consider how wide the lake is (how many tile does it contain?), how many Polders can be built, and if they will be next to each other. Remember, Polders are only meaningful when they can be built in great number next to each other, to feed one another additional adjacency bonuses. Don't forget the kinks with Mountains; sometimes, that easily-forgotten rule will tempt you into putting down a river-less city next to a huge lake, and now you have essentially a city that cannot use any of your bonuses.

If there is a river-less spot with a few potential Polders, but those Polders are isolated from one another, you may consider letting it go in favor of other spots. Contemplate this, even the most powerful Polder cities can be individually productive with high growth and

Production, but it is river cities that are both productive (with Industrial Zone complexes) and contribute

Culture toward the advancement of the entire empire. The consistent

Gold yield from Polders after Civil Engineering is great, but as a trade empire who will build Harbors and Commercial Hubs in every city,

Gold should never be a problem.

Movement applies to all naval units, including embarked units.

Most see the shoreline as an end. For the Dutch, the coastline was a challenge and an opportunity. The Netherlands spent 800 years reclaiming a country from the sea, using dikes, canals, levees, and pumps. Polders are the low-lying bits of land revealed when the water recedes.

The Dutch constantly maintained their polders to prevent the sea from reclaiming the land. Over the centuries, they mastered the art of keeping water out and reversing the effects of erosion. Today, more than a quarter of the Netherlands remains below sea level, leaving the country in a continuous game of tug-of-war with the North Sea. 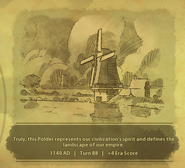 Historic Moment for building the Polder
Community content is available under CC-BY-SA unless otherwise noted.
Advertisement