Wayfinding
* Can embark and move over Oceans immediately.

Wikipedia has a page called:
Polynesia

The Polynesian people represent a DLC civilization for Civilization V that was released in March 2011 along with the Paradise Found scenario. Like the Danes, they have a unique sprite for their embarked units.

* This theme was originally composed for Kamehameha. The chanting in the war version includes the line "i ku wa," meaning "stand and shout," from "I Ku Mau Mau."

The Polynesians are a very interesting civilization, with a unique ability and improvement that allow them to be culturally dominant without necessarily having a small empire. Polynesian units can move through open seas from the very start of the game, permitting them to start settling foreign lands much earlier than any other civilization. One way to capitalize on this advantage is to build some reconnaissance units as soon as possible and start exploring the seas - they are able to find all these interesting places in the middle of the ocean while the other nations are still fighting Barbarians. Then send task forces of some of their fierce Maori Warriors (conveniently available right from the start of the game) followed by Settlers, clear out the Barbarians, and start creating colonies in the best spots.

Since Polynesia can embark before any other civilization, using three or four Scouts to clear the map of Ancient Ruins can be extremely profitable. It is often possible to pick up several free technologies, expand the

Capital with survivors and pick up enough

Faith to obtain an early advantage, along with scouting prime settlement locations. Be on the lookout for both luxury resources and settlement locations that can choke off opponents' progress. There is also a good chance of discovering one or more natural wonders, generating

Happiness that will expedite early expansion.

While it is prudent to be careful with Scouts initially to prevent them from dying at the hands of Barbarians, in all likelihood they will eventually pick up advanced weapons in one of the ruins and become Archers, which can form the backbone of an army. Consider adopting Honor even if not planning on adopting all the policies in the tree, since Barbarians are then more easily killed and also yield

The Moai are very important. These improvements allow the Polynesians not only to speed up cultural development, but also to defend their lands if built along the borders of new colonies. The cultural bonus stacks, so that Moai generate +1

Culture for each adjacent Moai. A focus on settling coasts (which is highly recommended with Polynesia) will make it feasible to strategically build Moai that are each generating 2-4

Culture per turn. Coastal deserts and tundra become more desirable due to this, since Moai open the option of turning remote cities into culture engines. Similarly, inner cities can use the

These special advantages are most useful in the early and middle game, so it's advisable to expand an empire as fast as possible. This is doubly important on island maps, on which they will be able to reach faraway islands long before the other civilizations have researched Astronomy. Adopt the Liberty policy tree to help with that. Use the fierce Maori Warriors to deal with any Barbarian dangers and to defend early settlements, then upgrade them along the chain to preserve their special ability.

A special advantage is that all naval vessels Polynesia controls can cross open ocean. This includes Triremes, Galleasses, and even captured Turtle Ships.

More of a loose collection of islands rather than a unified civilization, Polynesia boasts a rich culture and fascinating history. When most Europeans were mired in the Dark Ages, the Polynesians were perfecting the art of travelling across the mighty Pacific in small wooden canoes, navigating by the stars, weather, and wildlife. Eventually most of the islands were colonized by European powers, but much of the native culture and languages are still fiercely preserved for future generations.

Polynesia is the general name given to the grouping of islands in the central and southern Pacific Ocean, also known as the Polynesian Triangle. Bordered by New Zealand to the west, Hawai'i to the north and Easter Island to the east, the region includes over 1,000 inhabited islands. The name was originally introduced by French writer Charles de Brosses in 1756 to describe all the Pacific islands, but it was later limited to its current definition.

The islands as a whole are volcanic in nature, many with idyllic white beaches, palm trees, and clear lagoons - quintessential island paradises. Polynesia's climate is tropical and warm, but strong trade winds tend to keep many of the islands from reaching scorching temperatures. The islands are sometimes plagued by typhoons, which are active in the region from January to March.

The ancient history of the Polynesian peoples is still shrouded in mystery, but archeologists and anthropologists currently agree that one of three theories explains how the islands were originally settled.

The first theory, the Express Train model, suggests that some 3,000 years ago settlers expanded westward out of Taiwan over the course of roughly 1,000 years. They mixed little with any other natives they encountered, explaining current Polynesian's genetic and linguistic characteristics. The other two theories, the Entangled Bank and Slow Boat models, describe a longer migration pattern, one which includes mixing and interactions with all the native populaces, specifically the Melanesians.

Regardless of how long it took the first settlers to reach western Polynesia, the path they took has been charted with a fair degree of confidence. The northernmost point, Hawai'i, was settled around 500 AD, followed by New Zealand in 1000 AD. The exact date for when the Polynesians discovered Easter Island is still debated. Some archaeological evidence suggests that the island was first inhabited between 300 and 500 AD, but more recently the date 800 has come into favor. Other scientists believe that the island wasn't inhabited until as late as 1200.

The Polynesian triangle is a vast one, with each side measuring roughly 4,000 miles. To cover this amount of distance over the open ocean required an astonishing degree of naval technology, navigational aptitude, and bravery. Using the technique of wayfinding, navigators memorized the motion of specific stars, weather, local wildlife patterns, and the direction of waves on the ocean. They passed this information down orally to new generations of navigators, the secrets closely guarded by these elite families. To aid in the dangerous crossings, they also developed outrigger supports for their canoes, allowing them to safely cross the vast ocean. Many of these techniques and navigational aids are still passed down and used by modern Polynesian sailors.

Link to the Americas[]

Polynesian settlers arrived on the banks of present day Hawai'i sometime around 500 AD, although some evidence does suggest it may have been as early as 300 AD. These early inhabitants were probably from the Marquesas Islands, over 4,000 miles south of Hawai'i. A second wave of immigrants may have arrived from Raiatea and Bora Bora in the 11th century, or even from Tahiti. Some archaeologists favor the Tahitian theory, as an ancient Hawaiian folktale speaks of a man called Pa'ao, conclusively of Tahitian descent. These historians believe that the wave of Tahitian settlers brought with them the line of high chiefs, the Kapu system of laws, and the religious practice of human sacrifice.

Evidence also exists that the Polynesians sailed back across the Pacific once encountering these new lands, spreading American fauna and flora throughout the islands. For example, the sweet potato - a Native American plant - was found widespread through the Polynesian islands when European travelers first encountered the Polynesian settlements.

Arrival of the Europeans[]

The Polynesians lived in relative seclusion until the arrival of European powers, searching for new lands and trade routes. Many of the islands began to establish contact with the Europeans in the mid 1500s - some came as explorers and others as religious missionaries. However, in the 1800s many colonial powers, such as France, Britain, and the United States, began to forcefully colonize the inhabited islands, declaring them protectorates and territories of their respective empires. Only a few islands, such as Hawai'i, remained independent during this time.

The Present and Future[]

Despite the vast ocean separating the different islands, the native Polynesians still share many similar cultural traits, religious beliefs, and common languages. Sadly, many of the original indigenous people, such as the Maori, are now minorities on the islands, with peoples of European descent composing the main populace. However, most of the native populations on the islands strive to keep their culture and languages alive, and an active and effective process of revitalization and immersion is being pursued in most major areas.

The word "tattoo" originated in Tahiti and was derived from the local god Tohu, master of painting all the oceans' fish in bright colors and patterns.

Author Robert Louis Stevenson fell in love with the island of Samoa and settled there during his later years.

The Hawaiian archipelago is the largest island chain in the world, measuring at some 2,500 km (1,500 miles) from end to end. 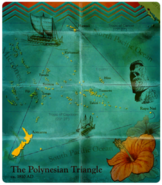