Relic slots.
Allows the purchasing of Apostles and Inquisitors with

Population in this city.
Provides 10

Tourism if the city has 10 or more

Tourism if the city has 20 or more

Population after Flight is researched.

Wikipedia has a page called:
Prasat

The Prasat is a unique building of the Khmer civilization in Civilization VI. It is built in the Holy Site district and replaces the Temple.

The Prasat is an incredible replacement for the Temple, as it provides an extra layer of rewards whenever a Khmer city reaches a

Population checkpoint while supplying an excellent output of

Culture in the meantime.

Faith yield is 6, compared to the standard 4 of the Temple. As a civilization with victory skews towards a religious or a cultural victory, this is useful right off the bat. This advantage over the regular Temple is amplified further when the Simultaneum policy card is run, and the Khmer is the one civilization who has no problem satisfying both the adjacency bonus condition and the

Population condition set by the card.

Second, and more importantly, it grants 0.5

Population in the city. Normally, each point of

Culture, the Prasat lifts this number up to 0.8, more than double what it used to be. A city with 10

Culture per turn, just from this building alone, that is twice the amount of

Culture granted by a Temple with Choral Music belief. The interesting aspect of this bonus is that the Prasat itself does not provide any means to boost growth, but only more incentives for you to grow populous cities. Although the Khmer can enjoy a health level of

Housing from their Holy Sites combined with the River Goddess pantheon and Aqueducts, the amount of bonus

Population of every city to 20. Here are some other

Food sources that may be useful:

With Flight, the Prasat also supplies 10

Tourism to any city with at least 10

Tourism to cities with at least 20. This huge burst of

Tourism will help usher the Khmer toward a cultural victory a lot faster. Therefore, once a city reaches the milestone of 20

Population, consider focus your growth power somewhere else, like swapping

Food tiles, moving Magnus with the Surplus Logistics title and

Trade Routes to other cities. It is also worth noting that the Stadium also grants a bit of

Tourism based on cities'

Population, making it a useful complementary piece to the Prasat, even without taking into consideration that Stadiums and Entertainment Complexes help alleviate

Amenity issues the Khmer is guaranteed to run into.

When not dominating the Mekong and the mainland of Southeast Asia, the kings of the Khmer empire would turn their attention to their faith. And what better way to venerate the gods than through erecting massive temples?

These holy sites at the center of Khmer worship would serve as both symbols of their warrior-kings’ piety and their engineers' brilliance. The earliest Khmer temple on record is Prasat Ak Yom (c. 800), its design reflecting the South Indian tradition of 'ratha'-style temples, towering edifices terminating in a crown at the top. Of course, the Khmer would add their own flourish, adding prangs, or towers to the structures.

The construction of these temples would become an enduring feature of subsequent Khmer rulers, first facing east in honor of the Hindu god Shiva, while later construction would turn west after Jayavarman VII introduced Mahayana Buddhism to the Empire in the Twelfth Century. 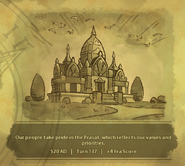 Historic Moment for building the Prasat
Community content is available under CC-BY-SA unless otherwise noted.
Advertisement