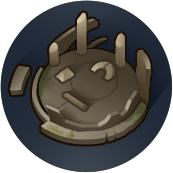 Progenitor Ruins appear to function similarly to the ruins in Civ V. They even use the same graphic as the Civ V version (presumably a placeholder) in some of the early screenshots. Exploring these ruins may unlock quests, and are one possible key to the Contact victory condition. You can use an Explorer unit to build an Expedition on top of the Ruins, in a similar manner to Archaeology in Civilization V.

Progenitor ruins are the remains of structures left behind by a nigh-mythical alien race. Once an expedition is completed on a tile containing this, the player will receive either an Affinity level increase or progress towards an advanced technology.

Shortly after planetfall, rumors began to circulate about the discovery of strange structures of unknown origin. Buried deep in the snows, sands, swamps and forests of this world, these supposedly predated human arrival by centuries. Nor was it likely that these ruins were the product of any of the indigenous beasts roaming the surface of this planet. Instead, it was thought by colonial scientists that these were the leavings of an advanced alien race – named the Progenitors – and archeologists were dispatched to dig into these sites in the hopes of learning more about them: who they were and where they went.

Retrieved from "https://civilization.fandom.com/wiki/Progenitor_Ruin_(CivBE)?oldid=154344"
Community content is available under CC-BY-SA unless otherwise noted.