Acts as a movement portal on a mountain range, allowing units to move into it and exit from another portal at the cost of 2

Movement. Can only be built on an adjacent mountain tile. Cannot be pillaged or removed.

The Qhapaq Ñan is a unique tile improvement of the Incan civilization (when led by Pachacuti) in Civilization VI: Gathering Storm. It must be built adjacent to a Mountain tile.

The effects of the Qhapaq Ñan is totally identical to those of a Mountain Tunnel. It can be placed in neutral territory, providing permanent vision on that Mountains tile and every adjacent tile to the civilization that builds it, even if later that Mountains tile gets taken over by another civilization. With Qhapaq Ñan, land units are able to traverse through Mountains at the cost of 2

Movement. Remember, Qhapaq Ñan allow units to pass through Mountains, not to stay and end their turn on Mountains, so in cases where the units do not have enough

Movement. Since units cannot stop on a Mountains tile, this improvement cannot be pillaged, but it can still be removed by volcanic eruptions and nukes.

Trade Routes sent to and from the Inca much more fluid and effective, and also facilitates exploration since they cannot be blocked off by a long mountain range. Remember that Qhapaq Ñan and Mountain Tunnels can be built on Mountains in neutral territory, but since the Qhapaq Ñan is available much earlier, as the Inca, you can utilize this to declare a surprise attack on civilizations who mistakenly believe they are safe because they are protected by mountains. Even when Chemistry is unlocked, there is no reason to build Mountain Tunnels over Qhapaq Ñan, since the Qhapaq Ñan is built by Builders rather than the more expensive Military Engineers. However, it is worth noting that the cost of a Builder scales upward for every Builder you have trained, while that of a Military Engineer stays constant, so a Mountain Tunnel built by a Military Engineer always costs 85

Production, while a Qhapaq Ñan built by a Builder may cost more depending on how many Builders you have trained that game and how many

build charges each Builder starts with, so if you want to be really efficient, that is something to consider.

Also, similar to the Mountain Tunnel,

Trade Routes going through Qhapaq Ñan will have increased yields in

Gold. A Qhapaq Ñan tile grants 15 "efficiency" points to any Trader passing through, which is a lot more substantial compared to other facilitating methods, like water tiles, Railroads or Canals. Read more here for more details.

Bear in mind that your opponents can use Qhapaq Ñan/Mountain Tunnels built by you, which means that they can use your bonuses against you if you go overboard with this improvement and put it everywhere. When wars are declared on you, immediately place your military units to block entrances and exits that lead to your core territory; otherwise your cities may fall in one fell swoop.

The Qhapac Ñan, also known as the Andean Road System, is a network of roads used by the Incan empire. What makes this site so remarkable isn't simply the distance covered – over 30,000 km – but also the terrain through which the roads travel - the mountains of the Andes, deserts, and lush rainforests. While the roads were used for transporting goods – usually by llama or alpaca – there was also in place a speedy messenger system. The chasquis were quick and agile men who would run through the extensive network of roads to pass messages to one another at relay stations until the message reached its final destination.

The Andean Road System was a truly innovative means for keeping such a vast empire connected, and to some extent, controlled by a central power. 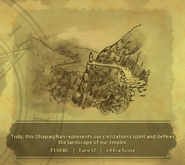