Production cost for Ancient and Classical wonders. Unlocks Canals with Masonry instead of Steam Power.

Builds wonders whenever possible, and likes civilizations that leave the wonders to him. Dislikes those with more wonders than him.


"The reason why China suffered from endless wars is because of the existence of feudal lords and kings. I corrected this."

Qin Shi Huang (18 February 259 – 10 September 210 BC), born Ying Zheng, was the first Emperor of China and founder of the Qin dynasty, putting an end to the Warring States period through a series of military campaigns that led to the unification of China. He leads the Chinese in Civilization VI.

Qin is the first among emperors and therefore he needs to be first in amazing wonders built for his legacy.

In your people lies your greatest strength, Emperor Qin Shi Huang. From all over the world, others will come to gaze upon the great walls and towering wonders of your united China. May the hands of your men never blister as they work hard and fast to raise the most impressive structures that the world will ever know. Protect them well, and you will forever be immortalized.

Qin Shi Huang's unique agenda is Wall of 10,000 Li. He dislikes leaders who have built more wonders than he built.

His leader ability is The First Emperor. His Builders receive an additional build charge, and can spend one of their charges to pay 15% of the

Production cost for Ancient and Classical wonders. In Gathering Storm, he can also build Canals after researching Masonry.

China is the ultimate in isolationist, builder civilizations. Qin can mobilize a more productive workforce than any other leader, and early in the game his Builders can use their charges directly on his beloved wonders. Once in possession of those wonders, their gunpowder weaponry and Great Wall should help them hang onto the land and wonders they have developed. With the Dynastic Cycle ability, they will gain even more from boosts. If they are able to achieve many of these added pushes, their progress through both progression trees should be swift.

Qin Shi Huang is voiced by Junchao Huang. He speaks Mandarin Chinese, though he utilizes the Classical Chinese vocabulary and grammar reserved for scholars and government officials in Ancient Imperial China.

He uses the pronoun "寡人" (guǎ rén) to address himself (instead of "朕" (zhèn), the personal pronoun reserved for emperors), even though this pronoun was used by vassal kings, such as Qin Shi Huang himself before he became the emperor of China. According to Records of the Grand Historian, Qin Shi Huang used "朕" (zhèn) for 9 years, from 221 to 212 BCE, then changed to "真人" (zhēn rén, a term very closely related to Taoism) due to his obsession with seeking immortality, shortly before his death in 210 BCE.

Delegation: Our trade delegation should be arriving soon with gifts of the finest spices, tea, and silk in the Middle Kingdom. Please, enjoy.

Accepts Player's Declaration of Friendship: You have proven a worthy friend to the Middle Kingdom, we accept your offer.

Rejects Player's Declaration of Friendship: You are not worthy of our friendship.

Requests Declaration of Friendship: Please, allow us to return your friendship with ours.

Trade Deal Accepted: We are grateful.

Denounced by Player: So, an insect dares to offend a dragon. That was not wise.

Too Many Troops Near His Border: Your army has relinquished any advantage of surprise. Withdraw your forces, and rethink your strategy.

Invitation to Capital: You have seen some of our magnificence. Is your capital even half as grand as ours?

Invitation to City: We have a city nearby. Would you like to visit? Our sculptors are getting quite good at working in terracotta.
[Note: This is a reference to the famous Terracotta Army, a collection of terracotta sculptures depicting his armies.]

Autocratic and ruthless, Ying Zheng may have been just what China needed to end the period of the Warring States and unify the realm. Known for the burning of books and the execution of recalcitrant scholars, he also laid the foundation of the Great Wall, created a national system of roads and canals, and sought the elixir of immortality. When he unified China, he considered his achievement so great that he took for himself a great name: Qin (his people) Shi (first) Huang (emperor). Due to his greatness, the title 'Huangdi' would be used by Chinese rulers for the next two millennia. And civilization would be rewarded with the Terracotta Army as a window on that greatness.

According to the monumental 'Records of the Grand Historian,' the babe Zheng was born to Prince Yiren of Qin and the concubine Zhao Ji in the city of Handan in 259 BC. When Zheng’s father died after a short three-year reign as king, the 13-year-old succeeded to the regality. Since the boy was deemed too young to lead Qin – which was already at war with all the others of the “seven warring states” (Qi, Yan, Han, Wei, Chu and Zhao) – power rested in the hands of the manipulative Prime Minister Lü Buwei.

Soon enough, Lu was plotting against the young king. A really long-term plot. The prime minister had earlier located and promoted one Lao Ai to the court, who soon enough seduced the queen mother Lady Zhao and had two sons by her. In 238 BC King Zheng set out in procession to the great city of Yong. Lao Ai, with Lu’s connivance, seized the queen mother’s great seal, raised an army, and rebelled. Zheng ordered his greatest general Lord Changping to attack; in the ensuing battle hundreds of the rebels were killed and Lao Ai fled. A price of one million copper coins was offered for Lao Ai. Who could resist so much copper? Soon the great fugitive was in custody. Most of his supporters were beheaded, and Lao was torn into five pieces while his entire family (including his sons) was executed to the “third degree.” Lady Zhao was placed under house arrest until her death years later. Lü Buwei committed suicide with poison before he could be taken. By 235 BC it was all over.

Save for surviving a couple of assassination attempts, Ying Zheng could now turn his attention to beating down the other warring states. First to fall was Han, which was overrun around 230. The Qin were blessed with a plethora of able commanders, including the king himself. And was it mentioned that he was ruthless? When Zhao was struck by a natural disaster (unspecified in the histories) in 229, Zheng turned his general Wang Jian loose, who promptly overran the kingdom within a year. By 223, Yan, Wei and Chu had all been defeated and absorbed. No fool, the Tian king of Qi sent 200 thousand of his people, mostly peasants, armed as best he could, to defend his western borders that abutted Qin territory. Unfortunately for him, Zheng invaded from the north, captured the royal family, and annexed Qi. And then proclaimed himself Qin Shi Huang.

With his immediate ambition to rule all China satisfied, the emperor set about reforming it as he wished. First he abolished the hereditary vassal system and established Jun (commanderies), Xian (districts) and Xiang (counties), all sensibly ruled directly by the emperor of course. He standardized Chinese weights, measures, currency – creating the banliang coin around 210 to make taxation much easier to track – and damn near everything else, including the length of cart axles. The latter so that these carts would easily traverse the new road network across his empire. Under his minister Li Si, the Chinese script was standardized, doing away with the variations across the conquered states, thus creating one great language that would stand the test of time.

But his greatest effort was saved for stamping out all that “fuzzy” thinking that prevailed across China. While the Warring States period was one of blood and fire, it was also one of free thinking and liberal philosophy, giving rise to some of civilization's greatest insights into the human condition. Across the kingdoms, the Hundred Schools of Thought, incorporating Confucian and Taoist teachings with other philosophies, sparked a great golden age. The writings of the School of Mohism (“everyone is equal before heaven”), the School of Yin-Yang (naturalism and the Five Elements), the agriculturalists and syncretists and the logicians, and so forth, profoundly influenced Chinese lifestyles and social consciousness. Since all this thinking and debate among the commoners wasn’t great for an autocrat, Qin Shi Huang decreed that all other schools of thought were banned and that henceforth only “legalism” (follow the law and live a just life) acceptable.

Commencing in 213 BC, at the instigation of his new, even-more-manipulative Prime Minister Li Si, the emperor ordered that all books – save those on astrology, divination, medicine, agriculture and histories of his great empire – be collected and burned. Those owning prohibited texts, especially the Shi Jing (“Book of Songs”) and the Shangshu (“Classic of History”), were to be punished. According to the Records of the Grand Historian (which must have been an acceptable text), Qin Shi Huang had some 460 scholars buried alive for hiding the banned books. While modern Chinese historians claim that this is but a Confucian myth, it makes a great story. Whatever the truth, it is a fact that the empire sought to control scholarship and thought across its expanse and eliminate intellectual challenges to the emperor’s rule.

Despite all this right thinking, in his twilight years Qin Shi Huang set out – or, rather, sent his minions – to find the elixir of life, a potion which would grant him immortality so he could keep enjoying his greatness. Expeditions were sent by sea (most didn’t return, perhaps wisely given how he reacted to failure), and thrice he himself visited Zhifu Island seeking a rumored “Mountain of Immortality.” But he never found the elixir nor the mountain, and died in September 210 BC during a tour of his eastern territories. So fearful of an uprising if word leaked out was Li Si that he concealed the emperor’s death until the caravan finally returned to the capital Xianyang, where Hoang’s second son Huhai (Li Si tricked the elder one into committing suicide) was proclaimed the new emperor. 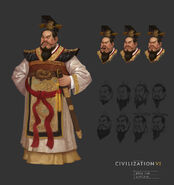