Building of the Medieval Era

Wikipedia has a page called:
National Library of Sweden

The Queen's Bibliotheque is a unique building of the Swedish civilization (when led by Kristina) in Civilization VI: Gathering Storm. It is built in the Government Plaza district and requires a Tier 2 government (Merchant Republic, Monarchy, or Theocracy) and a Tier 1 government building (Ancestral Hall, Audience Chamber, or Warlord's Throne).

When playing as Kristina, Great Work slots become even more valuable, and the Queen's Bibliotheque plays to this strength better than any of the other buildings or Wonders in the game. Not only can you automatically theme this building once it is filled, it contains a whopping six slots, the most in the game. Your goal is to earn a

Great Artist, and a

Great Musician as fast as possible to fill this building first, as it will become your main

Tourism hub for the entire game. It comes with a 25% discount compared to other tier 2 Government Plaza buildings, and of course, it unlocks a Legacy card. Generally speaking, pick Monarchy if you are playing a normal cultural/diplomatic game, or Theocracy if you are playing a

It doesn't come without its downside, however. If you want to prioritize building this, you will have to give up the ever so wonderful Intelligence Agency, making Sweden's espionage a bit weaker, but the sacrifice is definitely worth it. Great Works placed inside the Queen's Bibliotheque are not vulnerable to espionage missions, so they can never be stolen. Combined with the automatic theming, the

Tourism bonus is equal to that of 12 Great Works, or 4 full non-themed Museums of other civilizations. The main challenge in using this building is to be able to earn a Great Musician as quickly as possible to fill in the 2

Great Work of Music slots, but once this is done, Pingala can turn it into the central

Tourism hub of the entire world, before any other cultural civilizations.

"Bibliotheque" is the French word for a library, and as French was the vernacular language of culture from the Middle Ages through the Industrial Revolution, it is used here to reflect that history. The “Queen” in this case is in honor of Kristina of Sweden, who was a lavish patron of the arts and literature. Eleanor of Aquitaine was another notable patron of arts, especially the burgeoning troubadour tradition. Many other queens effectively used the soft power of her cultural patronage as tools of statecraft, sometimes gaining more than the king could on the battlefield. 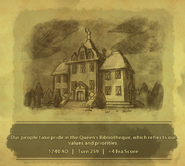