Ramkhamhaeng (1237 or 1247 AD – 1298 AD) was the third king of the Phra Ruang Dynasty, ruling the Sukhothai Kingdom. He leads the Siamese in Civilization V.

Ramkhamhaeng speaks mainly modern Thai with some older words. On his diplomacy screen, he is in his palace garden. Concept art portrayed him with attendants holding umbrellas.

Ramkhamhaeng will normally try any victory condition, but he will most likely attempt a diplomatic one. He is least likely to try a domination victory.

Culture. He will raise a large army to protect his lands, but his offensive army will typically be average in size.

Ramkhamhaeng is a rather friendly leader, but he will become hostile if he sees the player as a warmonger. He is also one of the leaders most likely to ask his allies for help.

Fittingly, Ramkhamhaeng tends to try making friends with city-states, as well as protecting them. He will almost never try to conquer them.

In 1278, a prince named "Ramkhamhaeng" inherited the small and unimportant kingdom of Sukhothai. In twenty years, employing a brilliant combination of military genius and shrewd diplomacy, he expanded his country's borders and influence to cover much of Southeast Asia.

Not much is known about Ramkhamhaeng's early life. His parents were King Sri Indraditya and Queen Sueang. He had two sisters and two older brothers, one of whom died early and the other, Ban Mueang, became king on their father's death. Ramkhamhaeng was said to have studied under the poet wise-man Sukathanta.

At 19 he served under his father during the latter's attack on the city of Sukhothai, which was held by the Khmer. The success of this attack greatly expanded the king's power, essentially establishing Sukhothai as an independent kingdom. Because of his heroic actions during the battle the prince was given the title "Phra Ram Khamhaeng," or Rama the Bold.

Upon the death of his father in 1257, his brother, the new king Ban Mueang, put Ramkhamhaeng in charge of the city of Si Sat Chanalai. Ban Mueang died twenty years later, and Ramkhamhaeng ascended to the throne.

During his reign Ramkhamhaeng expanded his kingdom's dominance west into Burma, east into Laos, and south down the Malay Peninsula. The king was a shrewd diplomat as well as a warlord; many territories joined his confederation voluntarily. Ramkhamhaeng did not seek to dominate Southeast Asia, rather he promoted trade and diplomatic alliances with surrounding kingdoms.

Most of what we know of Ramkhamhaeng's rule comes from a stone inscription he created in 1292 towards the end of his rule. This is the earliest surviving example of Thai language, and it portrays him as a wise and benevolent leader.

Ramkhamhaeng was an ardent patron of Buddhism. He also supported the arts and Thai artistic expression achieved an especially high level during his reign, especially in bronze sculpture and ceramics.

Ramkhamhaeng died in 1298. His extended empire, held together by his personal magnetism and brilliant international diplomacy, did not long survive his death, and the furthest provinces soon broke away. Sukhothai itself survived another century before it fell.

Ramkhamhaeng is viewed today as a great leader and the first to rule over a united Siam (later Thailand). It should be remembered however that almost all that we know about him comes from the stone inscription that he himself created. If he did have any major flaws, would he have carved them into the living rock for all of history to see? (Would any of today's world leaders do so?)

Still, there is plenty of independent evidence to show that he successfully created a great empire and his people prospered during his reign. And that's a record that any leader could be proud of.

Ramkhamhaeng speaks mostly modern Thai, as his language greatly differs from what is written on the stele allegedly attributed to him. The language in his day differs in grammar (mostly the omission of conjunctions) and vocabulary (the personal pronouns that were used normally in his day are considered vulgar in modern times, hence their omission from his speech by the game developers). Another somewhat amusing point is the reversal of the meaning of the word "แพ้," which is what he says when you defeat him. It means "to lose, to be defeated" in modern Thai, but in his day - and on his stele, describing his battle with the Mon people - it meant "to win, to beat."

Greetings to you, great King Ramkhamhaeng, leader of the glorious Siamese people! O mighty King, your people bow down before you in awe and fear! You are the ruler of Siam, an ancient country in the heart of Southeast Asia. Siam is a beautiful and mysterious land. Surrounded by foes, beset by bloody war and grinding poverty, the clever and loyal Siamese people have endured and triumphed. King Ramkhamhaeng, your empire was once part of the Khmer Empire, until the 13th century AD, when your ancestors revolted, forming the small Sukhothai kingdom. Through successful battle and cunning diplomacy the tiny kingdom grew into a mighty empire, an empire which would dominate Southeast Asia for more than a century!

Oh, wise and puissant King Ramkhamhaeng, your people need you to once again lead them to greatness! Can you use your wits and strength of arms to protect your people and defeat your foes? Can you build a civilization that will stand the test of time? 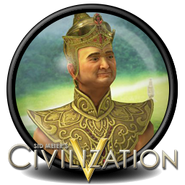