Melee unit of the Industrial Era

English unique Industrial era unit when Victoria is their leader. +10

The Redcoat is a unique melee unit of the English civilization (when led by Victoria) in Civilization VI. It replaces the Line Infantry.

In the Gathering Storm expansion, the Redcoat requires 10

The Redcoat is a powerful melee unit that serves as one of the strongest available when fighting on foreign shores, where it can even stand its ground in the Atomic Era against Tanks and Infantry.

In vanilla Civilization VI and Rise and Fall, the best thing about the Redcoat is that it appears for free when the English found cities on other continents (after Military Science is researched, of course). This means additional defense for these cities right from the start, not to mention the free unit. And, as with all civilization-specific units, the Redcoat requires no strategic resources, which is a great boon during a game in which the player has been unable to secure

Niter for Musketmen, and their melee infantry is stuck in the Medieval Era. A great tactic for these troops is to mass them until you're ready to launch an offensive. Since you receive a Redcoat every time you found/conquer a city on a different continent, you will be constantly gaining more and more military strength that you can turn against your opponents. Bear in mind, however, that Redcoats are quite expensive to maintain, so if you conquer too many cities you won't be able to afford the Redcoats and may go bankrupt. If you plan on making a Redcoat army, you must make sure your economy can handle it.

The Redcoat's swarming power is toned down a bit in Gathering Storm, as now only the first city built/captured on a continent earns a Redcoat. Rather than going on a great campaign on a single continent, this might make it more appealing to secure a foothold in each continent to maximize the number of Redcoats earned for free. A normal Redcoat now costs 10

Niter to train, down from the 20 cost of Line Infantry.

Should you face a Redcoat invasion, try to take them out before they can hit your shores. If they land, then try to out-range them with Field Cannons.

The red (or, more accurately, the shade rose madder) coat of the British infantry evolved from the ceremonial uniforms of the early 1600s; it was officially adopted in February 1645 AD when Parliament drafted the regulations for the New Model Army, with the 12 regiments of foot all wearing red coats with different colored facings to distinguish between them. For the next quarter-millennia most of the British infantry wore such, making them splendid targets among the trees, dunes, jungles and hills of the Empire. The rationale for such a choice was that (despite the fiction it was because bloodstains were disheartening for the men) red coats were instantly identifiable on the field in an age prior to use of smokeless powder, where battlefield visibility was a greater problem than tactical concealment. This choice of uniform hence helped maintain order, combat efficiency and morale (although not all British forces would use red uniforms). The term “redcoat” became a source of pride for the British, and a curse word for just about everyone else. 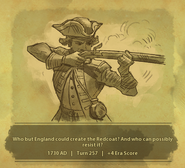 Historic Moment for building the Redcoat