The leader Bolivar (Warrior) starts with an additional starship.

Said to be the finest soldier ever produced by the Western Hemisphere, Rejinaldo Leonardo Pedro Bolivar de Alencar-Araripe began his celebrated career at the age of 16 by enlisting in Brasilia's Corpo de Fuzileiros Navais, lying about his age in the finest military tradition. His first assignment as a Marine was in support of a Security Council operation in northern Myanmar, where he saved his platoon, called in air support, and coordinated evacuation after their transport was shot down. His ascent after that was meteoric - rising quickly to sargento, then attending the prestigious Academia Militar das Agulhas Negras to become an officer. Commissioned as an Aspiriante at the outbreak of the Peshawar Crisis, he was part of a contingent hastily sent to Asia to help quell the crisis and deliver humanitarian supplies. Again, his heroism was proven at the Battle of Route Blue, as he stepped into command after the first, second, and third commanders of the forces protecting the refugee camp were killed in battle.

A complete listing of his military accomplishments would exceed the scope of this article, but there were few battlefield commanders held in as broad regard as Bolivar. Resisting staff duty until it became impossible to do so and still serve his nation, Bolivar has been in no less than nine combat tours, seven of them as a commander on the front lines. His talent for planning and improvisation with limited resources are legendary, and when not serving in combat he has been a fixture at Agulhas Negras, training the next generation of military minds.

Somehow, in this illustrious military career, he has found time to write the seminal volume of military sciences in the post-Mistake world: The three-volume Principles of Modern Warfare, and the slimmer On the Training and Conduct of Soldiers (for enlisted soldiers and military cadets). A proponent of special forces, total victory, aerospatial power projection, and professional NCOs, these volumes have served as the blueprint for infantry doctrine around the world, its pithy maxims backed up examples from history and Bolivar's own career. In anyone else, these books would be grandiose; in Bolivar's case they are statement of fact.

National hero for Brasilia, his name came quickly to the top of the list for commanders of the first Seeding projects. Despite a career "in the mud," Bolivar was endorsed by the Brasilian Air Force and the Space Department. Never one to decline a chance to serve his country, Bolivar honed the first Seeding to leave Earth's orbit into the professional, dedicated, force that was the hallmark of his military career.

I do not wish for war, but destiny cares little for my desires. My soldiers have trained their whole lives for this journey. Today, as we descend into the toxic fog, they prepare for the hunt. There will be enemies waiting, hiding. We will find them. We will eliminate them. This will be our first act upon our new world and we will not fail.

I wonder how to approach the native life on this new planet. Is it better to strike swiftly or to hide our strength? We will have to see how they react to our arrival. If they ignore us, I will be suspicious. I would not have us fall to alien life.

I do not ask much from my people, but I do demand what is necessary for success. All must be in order, if we are to face the trials ahead. They do not struggle, for they know I alone have been trusted to lead them to our new home. For this reason, it is I who must oversee all aspects of our mission. For me, there can be no struggle too difficult, no task too great. I must endure. Not for myself, but for them.

We move through space at remarkable speed, drawing ever closer to our destiny. And yet, I find no peace. If only there was a way to know what lies ahead. Instead, I am left to wonder. What will we find on this world? Will be greeted with hostility or quietly ignored? Even if I knew the answer, it would bring me no rest, for I cannot say which I would prefer.

It is quiet out here, among the stars. I know that when we reach this new planet, there will be much for us to do. My officers will set about their tasks, for which I must be ever-present. My people will only be as strong as I make them. And so I must be strong and cannot waver. For now, though, I appreciate the quiet.

Rejinaldo speaks an amalgamated language that is mostly Spanish with some Portuguese elements. This may reflect Brasilia's status as an amalgam of both Spanish- and Portuguese-speaking South American countries. Interestingly, all of Brasilia's city names are in Portuguese, not in Spanish.

Neutral No 2: Lo sentimos. (We are sorry)

Attacked: Nosotros no recuamos. La victoria será nossa. (We will not retreat. Victory will be ours) [This is mostly Spanish. "Recuamos" and "nossa" are Portuguese, and será could be either Spanish or Portuguese.]

Everyone in this room has been chosen for Seeding One, as you’ve probably guessed. Everyone in this room knows what’s at stake. If you accept, you are leaving Earth, your families, your homes, Brasilia, and you are not coming back. For the purposes of everyone on this planet, you will be dead the moment Aguia departs orbit. Your entire career, your entire life, it all ends. Your legacy on Earth will consist of a bronze plaque in Rio or at Agulhas Negras. This is a suicide mission.

Contemplate that for a moment.

I’ll only take those who go willingly. Only people who go willingly into certain danger and are willing to sacrifice what they know and love on this world will have the focus needed to create a new world for future generations.

You represent our most capable, flexible, and disciplined people. Brasilia is going to the stars before every other nation of the planet because of what you can do, together. In a very real sense, you are the most elite soldiers that humanity has ever developed. Now you are being asked to go on the most important mission ever assigned: Survive, grow and thrive on an alien world. Others may come after you, but if you accept, you are the immortal first.

Every one of you began with potential, and we refined you through training. No force in history has ever possessed the range of capabilities that you now have. You’ve learned things about manufacturing and production that no military force ever needed to – because if you go, you will be on your own. That last exercise, in Antarctica, you never hesitated, never balked, never despaired, and you crossed that continent without leaving anyone behind. You know what you are capable of doing now, and you will not falter, come planetfall.

Too many sacrifices have already been made for this mission. Every ounce of metal in our spacecraft is shelter not built for the people of Brasilia. Every gram of medicine for the stockpile is a child dead from a treatable disease. Every engineer, machinist, doctor, and soldier who worked on building Aguia or the probe fleet was a mind that was not focused on making life better for Brasilia. So why did Brasilia sponsor this mission? Because, once again, we put the needs of humanity ahead of ourselves. This is the one opportunity we have as humans to leave this planet. Brasilia knows this, and the nation has volunteered once more to be the strong arm protecting the helpless.

Brasilia was the guardian of the reconstruction during the Great Mistake. We stood guard over the UN camps in central Asia, our planes carried the relief supplies in and the refugees out of the fallout zones, and we took down the warlords and carved out a space where an effective government could be formed. We did what the Norteamericanos or Chinese would not do. We did what the Europeans could not do. We did it because Brasilia was young and strong, and because it is the responsibility of the strong to protect the helpless. We, Brasilia, acquitted ourselves with honor. We have earned the right to settle new worlds.

Your nation has put the needs of humanity ahead of itself. Your nation has selected you. I am asking you, as your commander, to come on one last mission with me. 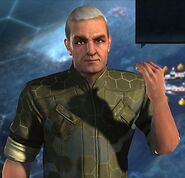