Edit
watch 02:19
Wiki Targeted (Games)
Do you like this video?
Play Sound

The Resurrection Device will permanently tie up 2 Geothermal resources.

"I went to depart this world. I stood at the threshold I heard, 'Do not leave, we need you!' I returned, by compassion moved." - Kavitha Thakur, Bhagavad 4

Civilizations often suffer violent social disturbances during transitional phases, and one of the most common precipitating events is the death of a factional leader. To what extent could social order be preserved if faction leader deaths were less common? Or more largely, would a longer lifespan make a better person?

Even pre-Mistake cultures of Earth examined the science of dying and identified genetic damage during DNA replication as the primary cause of senescence. Various hypothetical treatments were proposed - "snapshotting" the DNA of a person at a key age, and then maintaining the individual genotype through a complex biochemical regimen over a long period of time. But theoretical knowledge is not the same as ability, particularly with the resource constraints that were precipitated by the Mistake and the strict rationing of the Seeding. There were also complex ethical taboos that had to be negotiated. Extended lifespans are energy-expensive propositions, and thus cannot be extended universally. Choosing whose life to extend produces a series of ethical conundrums that are not readily solvable, even with the advent of Ethical Calculus and Polyrationality.

In short, it was not a lack of knowledge that prevented the construction of the Resurrection Device - there was a lack of will to begin the work. Certainly the biological knowledge of n-generational colonists was far beyond what was known on Old Earth, and the resources of the New World at their disposal made the engineering more practical, but there was still some last vestige of restraint that forbore beginning work on a system for making people live forever.

The project itself was highly classified. Social analysis indicated that widespread knowledge of and belief in a Resurrection Device would utterly destabilize society. Work began in compartmentalized research programs, with only a few key people aware of what the overall goal was. When sufficient advances were made, one final facility was created, codenamed "Heavenly City."

This facility operates the Resurrection Protocol under a veil of automation and a deeper mask of secrecy. Few know of the Resurrection Device until they are chosen to undertake it, selected for their apex contributions to culture, science, governance, or religion. Candidates are whisked away to Resurrection City, where the Protocol is applied. Over the course of weeks their body's DNA is repaired, swarms of the most advanced nanites scour the body for developmental defects (which are corrected), and the candidate's brainform is fully holographed for future storage. Only then does the candidate emerge, and then the culture can observe that the candidate reverses in age - becoming younger.

There are many popular theories that explain the Resurrection Device, some of them truly grassroots (such as "Miasma shock") and some carefully crafted by counter-intelligence agencies (of these, "Gort's syndrome" is the most popular). The theories usually attribute the rejuvenation to some mysterious power of the alien world, which is true in part, but only inasmuch as humanity needed a new world to liberate itself from the cult of natural death. 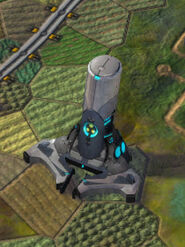