watch 04:21
Wiki Targeted (Games)
Do you like this video?
Play Sound


Reyna, otherwise known as The Financier, is one of the Governors introduced in Civilization VI: Rise and Fall. Her main expertise is increasing

Gold income for the city, as well as promoting

Tourism in Rise and Fall and generating clean

Shrewd and fiscally knowledgeable, Reyna is able to strengthen the economic power of a city, using finances to provide more than is normally possible.

Reyna is a flexible Governor with a starting title that is useful for any new city for any civilization (and later on, the Contractor promotion allows new cities to quickly buy

Districts). However, her promotions are geared towards trade (particularly maritime) and

Culture-oriented civilizations, such as the Netherlands and England. Reyna's Tax Collector promotion, however, suggests that the city she establishes herself in should have a high population, pushing the player to have only Commercial Hubs and Harbors for districts, if any at all, the remainder of that city's tiles being filled with Farms. Finally, it is important to note that her Curator promotion does not include

Relics, especially if you are playing as Poland.

Gold. She also has her Curator promotion given to Pingala, the Educator, which is replaced with Renewable Subsidizer, making green energy sources more valuable by increasing their

A financier is an official tasked with resolving budgetary and financial matters, requiring an astute understanding of economics and the psychology of markets. Playing with the money of the state is not a matter for the faint-hearted. 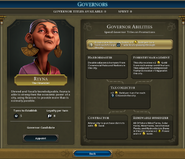 Reyna's titles
Add a photo to this gallery

Retrieved from "https://civilization.fandom.com/wiki/Reyna_(Financier)_(Civ6)?oldid=297280"
Community content is available under CC-BY-SA unless otherwise noted.