Faith for every adjacent Mountain and Hills tile
Provides

Can only be pillaged (never destroyed) by natural disasters

The Rock-Hewn Church is a unique tile improvement of the Ethiopian civilization in Civilization VI. It must be built on Hills or Volcanic Soil tiles.

Faith generation is the key to Ethiopia's strategy under Menelik II, and the Rock-Hewn Church helps considerably with these efforts. A single one can provide up to +7

Faith if surrounded by Hills and/or Mountains, which also translates to +1

Culture bonuses for a city founded on Hills. Once Flight is researched, it starts providing

Tourism equal to its tile's

Faith bonus, and its Appeal bonus can help create better places for National Parks and Seaside Resorts. All of this will spur the Ethiopians toward a Cultural Victory, especially if they use their accumulated

Faith to purchase Archaeological Museums and Archaeologists to fill them with

Artifacts. Even if a Cultural Victory is not your first choice, just the sheer

Faith output on this improvement alone plays very well into the Ethiopian toolkit, as it can translate into

Culture, or even quickly summon up a large army in just a few turns if you adopt Theocracy or build the Grand Master's Chapel.

In Gathering Storm, the Rock-Hewn Church cannot be removed from tiles by natural disasters, making it ideal for improving the tiles around active Volcanoes.

In the 11th century, Ethiopian Christians found themselves cut off. Whereas in centuries before, pilgrims from the ancient Christian centers would travel to the Holy Land, but Muslim conquests prevented these travels. King Lalibela, then, decided to construct a site closer to home, something impressive enough to draw pilgrims from the region without them having to travel across a war-torn region. To this end, he ordered the construction of a “New Jerusalem” – the rock-hewn churches of Lalibela.

These were not ordinary churches. Instead, each was carved from a single giant stone, including doors, windows, columns, along with all of the practicalities: drainage ditches, catacombs, and hermits’ caves. As was required by the order to create a “New Jerusalem,” these churches include replicas of Jesus’s birthplace and tomb, so that visiting pilgrims could feel that they were able to commune with God without risking life and limb. They were – and remain - vital places of pilgrimage and worship for Coptic Christians. 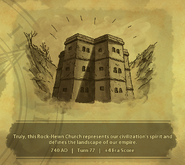