Culture is earned from kills on their

The Rough Rider is a unique heavy cavalry unit of the American civilization (when led by Teddy Roosevelt) in Civilization VI.

In the Gathering Storm expansion, the Rough Rider replaces the Cuirassier.

When the Persona Packs are enabled, the Rough Rider is available only to Rough Rider Teddy.

The Rough Rider is an excellent unit for Roosevelt's America to train en masse as soon as it becomes available. Its high

Combat Strength and mobility allow it to reach and deal with threats quickly, and the

Culture it generates by defeating invaders helps speed up America's civic development. Even when more advanced units become available, keeping a few Armies of Rough Riders on hand to repel attacks by hostile neighbors (or deal the finishing blow to weakened attackers) can be a cost-effective and culturally beneficial way to keep the peace on the continent.

With the bonuses from Roosevelt's leader ability, the Rough Riders are perfect for facing invasions, as they can receive up to 15 extra

Combat Strength if fighting on Hills on their home continent. This also means that you can finish conquering everyone else on your continent if you want to. However, you should try not to wipe them out completely, because having more opponents gives you more sources of visiting tourists to expedite your progress toward a Cultural Victory - instead, try to leave your neighbors with only one or two cities (preferably on a different continent from your

Capital), and make sure they're large enough to avoid succumbing to foreign Loyalty pressure if you're playing with the expansions.

The First United States Volunteer Cavalry – better known to the unenlightened as the “Rough Riders” (the nickname taken from Buffalo Bill’s “Congress of Rough Riders of the World” … and describing Teddy’s unruly recruits rather well) – was a regiment raised by Theodore Roosevelt in 1898 AD for action in the Spanish–American War. Roosevelt had been a staunch supporter of America acquiring a colonial empire by almost any means, and when troubles arose in Cuba the United States took advantage of the opportunity to beat up the moribund and bankrupt Spanish Empire. Roosevelt immediately resigned his post as Asst. Secretary of the Navy and raised a volunteer regiment of 1060 cowboys, ranchers, miners, college athletes, and other rough sorts from Arizona, New Mexico, Texas, and Oklahoma. Although a cavalry unit, they served with distinction – mostly afoot, as at the famous charge up San Juan Hill (actually, Kettle Hill – but that’s Americans abroad for you) on July 1. Afterward the Rough Riders were part of the siege of Santiago, until Spain surrendered in August, whereupon the volunteers returned home and went about celebrating in their own ways. 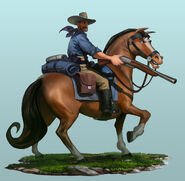 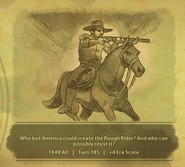