World wonder of the Industrial Era

Production in this city.

Production for each Mine and Quarry in this city.


"The industrial heart of Germany practically stopped beating. Hardly anyone worked; hardly anything ran. The population of the Ruhr area … had to be supported by the rest of the country."
– Adam Fergusson

Wikipedia has a page called:
Ruhr

The Ruhr Valley is an Industrial Era Wonder in Civilization VI. It must be built along a River adjacent to an Industrial Zone with a Factory.

The Ruhr Valley is one of the most powerful wonders in Civilization VI, massively boosting

Production, and greatly facilitating both Science and Domination Victories. The Ruhr Valley is also possible to acquire relatively early as compared to the other modern wonders, and it is advisable to rush Industrialization to try and secure the Ruhr Valley before others.

Since the 1700s, the Ruhrpott (Ruhr Valley) has been dug up – the coal and iron mines there are some of the most productive in the world. Initially the ore was easily accessible by strip mining; after that was exhausted, the German miners dug deeper. By 1850, some 300 mines were in operation in and around the Ruhrpott. And, since it was troublesome to ship all this elsewhere, collieries, blast furnaces, rolling mills and the high chimneys of the Industrial Revolution shaped the skyline. Nor was coal and steel the only things pouring out of the Ruhr; by 1820 hundreds of water-powered mills were producing textiles, lumber and iron bars. Urban centers filled with wage slaves sprawled across the land … until today Bochum, Dortmund, Duisburg and Essen form one interconnected metropolis. With the recent decline of the coal and iron industries, the Ruhrpott has undergone a cultural transformation, and such edifices as the Zeche Zollverein coal mine complex and the Gasometer Oberhausen have been reborn as historical landmarks, even listed by UNESCO as World Heritage Sites! 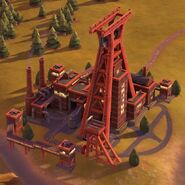 Ruhr Valley in its wonder movie
Community content is available under CC-BY-SA unless otherwise noted.
Advertisement