Combat Strength against Heavy and Light Cavalry promotion class units. This unit has 3

The Sabum Kibittum is a unique melee unit of the Babylonian civilization in Civilization VI. It is available without any technological research.

The Sabum Kibittum is an interesting unique unit. The stat that may jump out at you is its disappointing 17

Combat Strength - 3 less than the Warrior, which it does not replace, and less than any unit in the game with the exception of the Scout. However, it has some things going for it. First of all, it has 3

Sight radius of 3. This makes it as effective, and slightly more survivable, than the Scout; additionally, it has the standard melee +5

Combat Strength bonus against anti-cavalry units, which makes it slightly better at dealing with Barbarians than, say, the Okihtcitaw, but still not a good choice at clearing the outpost: against a Barbarian Spearman, it only has 22

Combat Strength compared to the Spearman's

Combat Strength of 25 plus extra

Combat Strength from fortification. Finally, it has a whopping +17

Combat Strength bonus against all cavalry units, whether light or heavy. While not especially suited for conquest by itself, the combination of its unique traits makes the Sabum Kibittum an excellent defense against cavalry, even more so than the underpowered Spearman. Its bonus makes it almost as strong against cavalry, it is not only cheaper but available earlier as well, and its greater

Movement allays the main flaw with anti-cavalry units: the inability to catch up with the cavalry it's meant to defend against. It could perhaps supplement an invasion and deal with pesky cavalry harassing your main army of Warriors and Archers, or use its

Babylon especially wants to scout, and be on the lookout to claim as many Tribal Villages as possible to pick up some early

Eurekas. Thanks to the reconnaissance prowess of this unit, there is virtually no reason for Babylon to build Scouts. At only 5 extra

Production, you have a maneuverable unit that can clear Barbarians quickly and can even be used effectively in combat. Also, because of its classification as a melee unit, its relevancy can be prolonged into later eras. Overall, the Sabum Kibittum is just a better unit - and a far more worthwhile long-term investment - than the Scout. Not to mention, there is not a single technology in the game whose

Eureka has to be triggered with a recon unit.

With that being said, despite being a more worthwhile investment than the Scout, the Sabum Kibittum should never be the heart of the Babylonian army. Due to its obvious weakness against melee and ranged units, dealing with this unit is very easy. Not to mention, Babylon is a civilization with the most rigid build order in the entire game; in the early turns of the game, they perpetually have way too many priorities on their plate to maximize the number of

Eurekas unlocked. Mass training the Sabum Kibittum means you would have to let go so much progress in favor of a unit so inefficient at conquest, even if you have a horde of them. With their ability to unlock technologies at a ridiculous speed, especially with the popular and simple Crossbowman rush, there is virtually no reason for Babylonians to build more than one of this unit for the sole purpose of exploration.

After Hammurabi’s time, Babylon was occupied by the Assyrians, who reshaped Mesopotamian warfare. The Assyrian king Tiglath Pileser III took up what was originally a collection of conscripted farmers and made from them an integrated army, with different units taking up different tasks (e.g. supply lines, communication, engineering, etc). Further, the Assyrian troops used iron weapons, when most of their contemporaries were still using bronze. The Assyrian sabum kibittum – shock troops – would have been terrifying. What they left behind certainly was; in their monuments, Assyrian kings repeated, “I destroyed, I devastated, and burned with fire.” 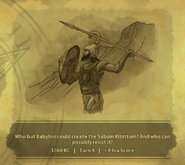