Wikipedia has a page called:
Saka

The Saka Horse Archer is a unique ranged cavalry unit of the Scythian civilization in Civilization VI.

Compared to an Archer, the Saka Horse Archer has the exact same

Range have a very limited scope of use in combat, except on defense. The purpose of a ranged unit is to focus fire and whittle down enemy units from behind the front line. Ranged units with 1

Range cannot focus fire well and expose themselves to the front line when attacking, where their low

Combat Strength makes it easy for enemies to kill them quickly. Also, since Scythia is a pure domination civilization, there is just no reason for you to play on defense. Things would be slightly better if between the Saka Horse Archer and the Archer, there was only a simple trade-off of

Range for mobility, but the Saka Horse Archer is almost twice as expensive as the Archer to train and twice as expensive to maintain. If you take into account the fact that you get two of these every time you build one, it is slightly cheaper than an Archer, but will quadruple the maintenance cost. A large number of Saka Horse Archers will create a huge economic burden on your empire without actually boasting any militaristic prowess on the battlefield, though this can be eased with liberal use of your Kurgans. This unit is not the backbone of a strong Scythian army, so you should build it only once for the Era Score, and then delete or kill both of them to save your

Gold, as this unit is definitely not worth the high investment. Archers will be slightly slower than your army of Horsemen, but their greater

Range allows them to fill the same niche as Saka Horse Archers at least as well and at a much lower cost.

Since this unit upgrades to the Field Cannon, you can train a few Saka Horse Archers before researching Ballistics, then immediately slot Professional Army or Force Modernization to upgrade them. You will instantly have an army of Field Cannons for a cheap

Production cost, thanks to the Scythian civilization ability. However, this strategy should only be attempted when you have a lot of

Gold from your previous conquests, as ranged units after the Crossbowman are generally underwhelming (read more here), especially when they are just fresh out of the gate without any previous

Promotions. Unless your treasury is overflowing with

Gold, your best bet is to save it to upgrade your light cavalry units to Cavalry, also unlocked in the Industrial Era.

The term “Saka” may refer to the Persian and Sanskrit word for the Scythians, or it may refer to a specific tribe among those horse-barbarians to the north of Assyria. Most of the confusion seems to be the ambiguous usage of Saka among the ancient “historians” – Herodotus, Strabo, Pliny the Elder, and that lot. Herodotus states that the Saka were horse archers, riding without saddles or stirrups, and distinguished by wearing quilted trousers, open tunics and “high caps tapering to a point and stiffly upright.” These horse archers were feared in the open, mostly for harassing a moving column or raiding the baggage trains, but not very good in a stand-up fight. As Alexander the Great had shown at the battle of Jaxartes (329 BC) the Saka had no staying power, and could be readily driven off by massed infantry in depth supported by ample numbers of foot archers, whose greater range and rate of fire gave them a distinct advantage over the mounted ones. 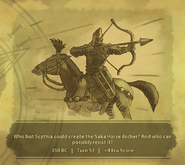