Leader bonus - Righteousness of the Faith


"Battles are determined by preparation and numbers, and God."

Wikipedia has a page called:
Saladin

Al-Nasir Salah al-Din Yusuf ibn Ayyub (1137 – 4 March 1193), better known as Saladin, was the first sultan of Egypt and Syria and the founder of the Ayyubid dynasty, known for his decisive defeat and conquest of the various Crusader states, particularly the Kingdom of Jerusalem in 1187, securing Islamic control over the Levant. He leads the Arabs in Civilization VI.

Often science and faith don't mix, but for Arabia they sure do.

The marriage of science and religion is a delicate balancing act, but one that you have mastered, Saladin. Your quest for knowledge is noble, and your people have a deep respect for you. But you need not rush into the unknown. Given time, the answers to life's most puzzling questions will find their way back to Arabia.

Saladin's unique agenda is Ayyubid Dynasty. He likes leaders with his worship building, and dislikes leaders who follow other Religions or wage war on followers of his Religion.

His leader bonus is Righteousness of the Faith, which lowers the

Arabia is a religious civ that doesn't have to worry about racing to beat the other players to Great Prophets; they can just let a Religion come to them. Once they have established their Religion, then they can quickly move forward on a number of fronts. They will spread their Religion to as many cities as possible to boost their

Science output, and add a Holy Site to most of their cities to allow them to then add their worship building (which boosts overall city output of

Culture). Their worship buildings are inexpensive for other civilizations to add, too: a smart move for Arabia's neighbors to keep Saladin's wrath at bay.

Saladin is voiced by Alhan Gharam. He speaks Classical Arabic.

Delegation: I have sent a delegation to you with gifts from our empire. They bring the sweetest fruit, rare snow to cool you on even the hottest day, and the most excellent of horses. Please receive them as our courtesy.
[Note: According to Baha ad-Din ibn Shaddad, on several occasions Saladin sent Richard the Lionheart fruit and snow at his request.[9][10]]

Accepts Delegation from Player: A thousand thanks for your gifts. Your delegation will be treated with the utmost respect.

Rejects Delegation from Player: No, we cannot accept.

Accepts Player's Declaration of Friendship: I understand now that you are a friend to my nation. Let us declare our friendship to the world.

Rejects Player's Declaration of Friendship: Your offer is a generous and kind one, but we must humbly decline until we can be assured of your intentions.

Denounced by Player: Everyone is critical of the flaws of others, but blind to their own.
[Note: This is an Arabic proverb.[11]]

Too Many Troops Near His Border: I would be blind not to see your army in front of me. Please, move them from our borders, unless... you anticipate war?

Invitation to Capital: Come, let us exchange information about our capitals. I invite you to tell me of your people, and I am happy to tell you of mine.

Invitation to City: I am honored to offer you the hospitality of our cities: the finest arts, the most delectable feasts, and the melodious adhan heard throughout. Would you care to visit?

Salah ad-Din Yusuf ibn Ayyub, known to his foes (and there were many) as Saladin, was a Kurdish noble who rose to command the Arabic armies of the Faithful as the first sultan of Egypt and Syria. Born in Tikrit around 1138 AD, his personal name was Yusuf, but his given name was a laqab; “Salah ad-Din” translates loosely as “Righteousness of the Faith.” And righteous Saladin was, given a military and religious education by his father Najm ad-Din Ayyub, former warden of the fortress at Tikrit. The Ayyub family became embroiled in a feud and was banished from Tikrit – leaving, supposedly, the night Saladin was born – and ending up in Mosul in 1139.

The boy Saladin proved quite bright, and continued his education in Damascus (for which he developed a particular fondness) when his father was appointed commander of the fortress at Baalbek by Imad ad-Din Zengi, atabeg (loosely, “governor”) of Mosul, Damascus, Aleppo and Hama. Saladin was especially good at arithmetic and mathematics, immersing himself in the works of Euclid and in the Almagest. He could cite the genealogies and histories of Arab nobility, as well as the bloodlines of famed Arabian horses (the latter probably less useful than the former). And he could quote the Hamasah, a ten-volume collection of Arabic poetry, at length. But, almost inevitably, he was sucked into the military career expected of him by his family, which included his maternal grandfather Nūr ad-Dīn, who had succeeded Imad as emir of Syria in service to the Seljuk Empire.

Saladin’s military service began at the age of 26 under the patronage of his uncle Asad ad-Dīn Shīrkūh, an influential general in service to Nur al-Din. In a campaign against Crusaders and the Egyptian usurper Dirgham at the behest of the Fatimid caliph al-Adid, Saladin distinguished himself in the sack of Bilbais and at a battle near the Nile west of Giza, where he led the right wing. Proceeding to Alexandria, Saladin entered the city unopposed and, in fact, was welcomed with open arms – and money, arms, supplies. Faced with a superior advancing Crusader-Egyptian force, Asad, being wise, withdrew with the bulk of his army, leaving Saladin and a small troop to defend the city. He did so brilliantly.

Things soon got complicated. Asad became embroiled in a three-way power struggle with Shawar, the vizier of Egypt for the crumbling Fatimid caliphate, who called upon the Crusader King Amalric I of Jerusalem for support. In 1169, Shawar was assassinated (reportedly by Saladin), and then Asad al-Din Shirkuh died later that same year. Although Nur ad-Din chose a replacement – who was not Saladin – for Asad, the Fatimid caliph decided for unknown reasons to appoint Saladin the new vizier of Egypt. In the next few months, Saladin avoided an assassination attempt by resentful Egyptian officials, and decisively put down a revolt by Fatimid regiments. So decisively, in fact, that he never again faced an uprising in Egypt.

According to Arabic historians, in June 1171 Saladin was “ordered” to reestablish the Abbasid caliphate in Egypt by Nur ad-Din. When al-Adid died, and after Saladin had a few of his officials executed or assassinated, Egypt was firmly under his control. While passing time until the next bump in his fortunes, Saladin outmaneuvered the Templars and sacked Gaza, captured the Crusader castle at Eilat which had been annoying Muslin shipping in the Gulf of Aqaba, and smashed a Nubian invasion, taking the Nubian town of Ibrim. While transporting some of the plunder to Nur al-Din in Damascus as a gift – including “an ass of the finest breed” (showing Saladin’s horse sense) – he took the opportunity to ravage the Crusader holdings. Oh, and he occupied Yemen, driving out the unbelievers lingering there.

Upon Nur al-Din’s death in May 1174, Saladin promptly proclaimed the establishment of the Ayyubid dynasty in Egypt … with himself as sultan, naturally. Although Nur al-Din’s 11-year-old son had been proclaimed successor as caliph by a group of powerful emirs, Saladin feared anarchy in Syria, and with that the prospering of the infidels. But he faced an untenable choice: seize Syria for himself from the young as-Salih Ismail, forbidden by the Qur'an, or await an unlikely invitation to invade. In sha’Allah, when as-Salih was spirited away to Aleppo by an ambitious uncle who planned to eliminate all his rivals, the emir of Damascus was forced to appeal to Saladin for support.

It was the hand of destiny at work; Saladin raced across the intervening desert with 700 picked warriors and, joined by emirs and Bedouin tribesmen, he entered Damascus to general acclaim by its citizens (no fools they). Leaving one of his brothers in charge there, Saladin soon reduced other cities that had been loyal to the former caliph. The next year was eventful, with Saladin managing to avoid several assassination attempts (including a couple by the Ismaili sect named the “Assassins”). In the end, the surviving emirs of Syria recognized a good thing and proclaimed Saladin sultan there as well as in Egypt. Making peace with the Assassins and other irritants in his empire, all of whom recognized that it would be righteous to kick the Europeans out of the Holy Land, Saladin readied the forces of Islam.

Saladin’s war against the Christians raged until his death in 1193 AD. Marked by a string of Ayyubid victories and the occupation of most of the Crusader kingdom of Jerusalem, including the holy city itself in 1187, Saladin became infamous across Europe. The result was the Third Crusade – mounted by England’s Richard the Lionheart, Philip II of France, Frederick Barbarossa, among others – marked more by massacres than battles. By September 1191, the Crusader army had been reduced to about 2000 men-at-arms and 50 knights fit for battle. Richard and Saladin finally came to an agreement, the Treaty of Ramla in 1192, whereby Jerusalem would remain in Muslim control but be open to Christian pilgrimages. The treaty proved Saladin’s most lasting legacy. 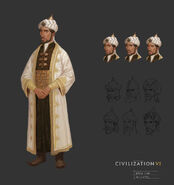