Once a mere militia-man in a small army sent to take down a nationalistic communist revolution in the Congo, Samatar skyrocketed through the ranks of the Union through his fatherly leadership style and several deals made with both the PAC and the ARC in order to develop and redevelop African territory. Secretly, Samatar despises both, stating in a letter to his brother that ". . . I hated how I had to smile and thank those ministers of trade, with their suits made from the wool of village goats of Africa, over cups of our coffee, playing the part of the big chief man, and they smiled and congratulated themselves on pulling another one over on our people. They came to Africa to make a fortune, and they left with a fortune, and I let them do it because I didn't see any other way for our people's future." While slightly skeptical of religion, Samatar is a consummate Humanist and has a near-encyclopedic knowledge of African history, particularly pertaining to the colonial period and ancient Egypt.

The leader Barre (Benevolent) reduces the cost of cities by 25%

Avuncular, genial, affable, affecting an air of bonhomie, Samatar Jama Barre wished to be addressed as Kubwa Mjomba (“great uncle” in Swahili) by those he both commanded and protected. Despite his seeming benevolence and absent-minded demeanor, he was nonetheless an efficient and effective administrator, an able diplomat, and ruthless when necessary. Barre was amused and likely pleased when detractors likened him to the traditional African village chieftains of the past, claiming him to be a throwback and out-of-step with the new world in the wake of the Great Mistake. But the Peoples’ African Union made a wise choice when he was selected as one of their colony governors.

Rising from the poverty and violence of the inundated streets of Hargeisa, Samatar joined the African Union’s resurgent military forces, eventually rising to the rank of Major. For three decades he served in a variety of increasingly important posts, military and civilian, rising steadily in both ability and influence. He was able to overcome lingering tribal tensions, dealing with the polyglot cultures of Africa with both reverence and common sense. Barre displayed those same diplomatic skills when negotiating with those outside the African Union, and brought to culmination several international agreements that helped propel the Union’s colonization effort before he was selected to command one of those colonies.

Barre proved to be just as efficient against any perceived threat to the well-being and safety of those under his protection. In dealing with nascent warlords, religious fanatics, and local dictators, he either brought about an equitable peace, or bludgeoned them into submission. Although never known as a military genius, his troops were extremely loyal to their “great uncle” and fought with abandon for his approval. Samatar Barre never lost a battle, although he took no credit for his victories and viewed them as lamentable necessities.

Though not religious himself, he was tolerant and accepting of others' religious traditions. In the end, it was this tolerance, coupled with his intellect and personality that would shape the African Union’s colony on the new planet.

On the eve of our landing, let us meditate on the pearl diver, who saturates his lungs with air, before descending into the depths. What waits for us, we cannot know, be it hostility or indifference. But we will gather our strength within and plunge to the surface below. We will not come up for air until we have found what are searching for – our new home.

On Earth, we were witness to a great sight. An orangutan. The last of its kind. Her eyes were empty. Any spark they once held, drained by sadness. She knew. She knew that we were her last hope and that we had failed her. As we settle these new lands, we must not repeat the mistakes of our fathers. We must protect the gifts of nature. Only then will we prosper.

On Earth, we had plenty. What we had was squandered and we were left with naught. Now, we have no choice but to reap what we have sown and create from it what we can. We journey from nothing to something, in hope that we may find respect for our new world and that our children may find respect for us.

As we approach our new planet, we must contemplate the possibilities of regulation. We were careless when we destroyed our planet. If protections had been in place, perhaps we would not have been so foolish. None wish to be controlled. But like children, we must be given rules if ever we are to learn.

We are strong. We have faced much and will continue to forge ahead, but only if we learn from our mistakes. When we reach this world, we must give ourselves to it; strive to understand it. We are no longer a young species. We have no excuse for the destruction we visit upon our home.

(Upon meeting for the first time) "Many fortunes to you and your family. I am Samatar Jama Barre of the People's African Union, but please, call me Kubwa Mjomba."

(To Al-Falah) "The People's African Union welcomes you. Our families were once the closest of neighbors, and so I hope you will be too."

(To ARC) "Hello, Suzanne. What business brings you to me today?"

(To Brasilia) "Rejinaldo! How are you, my friend? Full of peace, I hope."

(To Kavithan Protectorate) "Kavitha, it is a pleasure to see you, as always."

(To INTEGR) "Lena, we were beginning to worry you wouldn't make it. How was the voyage?"

(To PAC) "I'm looking forward to a new era of peace between our people."

One of the last times we spoke, you asked me why I permitted so many powers from outside of Africa to gain access to our resources, when we both knew the great cost of the colonial legacy on our people. I can remember now, that evening in Tripoli, you said: "What difference is there between Cecil Rhodes and an ARC contract?" I asked you to trust me in the trade deals, and you never opposed me in public, but I know that you never agreed with me.

Walaalkaa, I saw no other way forward for our people. We had titanium, but no machinists. We had petroleum, but not enough modern chemical processing plants. We never had enough money, and our people never had the resources for education or training. We didn't have time to build these things up, either.

It was like that time that the Union sent us to put down the Glorious Resistance Force in the Congo. Remember how they sent us out to die with whatever small arms ammo we could carry? We had to trade resources and lease launch facilities, because we had too much of the one thing and the Seeding requires a thousand different things.

I hated it, brother. I hated signing those deals because I knew that you were right, that we were signing over the richness of Africa again, maybe for the last time. I hated how I had to smile and thank those ministers of trade, with their suits made from the wool of village goats of Africa, over cups of our coffee, playing the part of the big chief man, and they smiled and congratulated themselves on pulling another one over on our people. They came to Africa to make a fortune, and they left with a fortune, and I let them do it because I didn't see any other way for our people's future.

You're in Tripoli now, and you have to live with the choices that I made. I know the oil fields off Nigeria are going dry. I know that the neodynium prospecting in Kenya failed to find new formations. I know you tried to hide these from me, and I forgive you for that. I don't know how the Union is going to meet the contract quotas for the PAC this quarter, much less next year, but I know you and Bugansowa are clever and live for a chance to pull off one of your little political stunts. I wish I were there to see whatever you cook up for Wu.

We are going to make this new world. We are not going to repeat what happened to Africa on a new planet. We are going to raise our children to remember what happened here on Earth, telling them every night before they go to bed: Remember Africa - remember that men with guns will try to take your birthright away from you. We will teach them about elephants and lions and Mt. Kilmanjaro and how the Nile floods made Egypt the first great civilization in the world.

They tell me it is likely that other Seeding expeditions will settle our world. When they do, and when their heads of state come and ask me for titanium or oil or land, I will smile and nod and play the part of the nice, simple old village chief. But Africa will be in my heart, Walaalkaa, and history will not be repeated.

I love you, my brother. Know that I leave the Earth with a heavy heart – connected by many years in the struggle together, but so far apart that we haven’t spoken in what feels like years.

PS: I hear you have been going to the mosque again. Walaalkaa, you know what I think about imams and priests…but I wish you nothing but peace, whatever you choose. 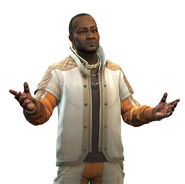