Wikipedia has a page called:
Samurai

The Samurai is a unique melee unit of the Japanese civilization in Civilization VI. It replaces the Man-At-Arms and is unlocked with Feudalism.

In the Gathering Storm expansion, the Samurai requires 10

The most outstanding statistic of the Samurai is its base

Combat Strength of 48, rivalling that of a Knight (the only unit with significantly higher melee

Combat Strength in this era is the Malian Mandekalu Cavalry, at 55). With that being said, a Samurai requires less

Iron than a Knight, and at a much lower

Production lower in Vanilla and Rise and Fall, 60

Production lower in Gathering Storm). Basically, with the Samurai, you are making a trade of mobility for a better economic price, a trade that becomes a lot more reasonable in Gathering Storm. Also, considering Feudal Contract policy card is unlocked with Feudalism, an important civic, while Chivalry is unlocked with Divine Right, a civic of a dead-end branch, unless you are playing religious Japan, your unique unit is a much better investment than Knights. An additional point that goes in favor of the Samurai over the Knights is that being a melee unit, it has access to the Tortoise

Promotion, while Knights have a similar but weaker

Promotion, making Samurai the superior unit to stand in the frontline against Crossbowmen, the bane of all Medieval conquerors.

After the April 2021 Update, the path to unlock Samurai is better than ever before. First, the Man-At-Arms was introduced, a new standard unit that the Samurai now replaces. No longer a standalone unit, Samurai can now be pre-built as Swordsmen and upgraded into if you have a good

Gold income. Even better yet, unlike Berserkers and Khevsurs, Samurai is now unlocked with the Feudalism civic, an all-important civic that you would want to beeline anyway. While this may not seem like much, remember that Japan has more boosts toward

Science generation (thanks to the discount towards building Theater Squares provided by Hojo), meaning that this unit is unlocked surprisingly early. This can allow Japan to quickly take over unsuspecting neighbors come the Medieval Era.

The bonus that allows the Samurai to suffer no penalty when damaged makes a comeback in Civilization VI. If the new

Combat Strength penalty, roughly 20% of the Samurai's base

Combat Strength, a lot less significant than what it used to be. Not to mention, this bonus, in both games, shines brighter the lower the HP of the unit is. When only 10 or 20 HP is lost, the extra

Combat Strength it "gains" is barely noticeable, but at low health threshold, the amount of extra damage dealt can be somewhat meaningful. But here is the deal: you do not want to smash your low health units into the enemies just to prove a point that your

Combat Strength is reserved, you try to run them away and heal them back up, so when the ability can shine the brightest is also the moment you want to use it the least. On defense, it makes the Samurai a bit sturdier, but on offense, the bonus is barely useful, as you only use a dying unit to attack when it is surrounded and a death next turn is guaranteed. A little bit more damage dealt with the unit's last gasp should not be the bonus to rely on.

Until the ‘ashigaru’ (peasant) infantry were armed with muskets, the samurai (“those who serve in close attendance”) dominated warfare and politics in Japan for nearly a thousand years. Although the roots lie in the Nara period, it was during the Heian period c. 800 AD that bushido (“the way of the warrior”) was codified and a number of noble clans adopted its philosophies. By the time of the Heiji Rebellion of 1160, the samurai clans dominated the landscape, with various factions fighting over the shogunate, defeating the Mongol invasion, and otherwise building an impressive historical legacy of fact and myth. Throughout the Edo period, Japan was unified and at peace, and so the samurai became refined - writing poetry, attending kabuki theater productions, and engaging in the sorts of intrigue that one would expect from a bored and pampered class of would-be warriors. Unfortunately, the Emperor Meiji instituted a number of reforms in 1868 – including the end of the shogunate and abolition of the samurai class. 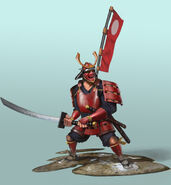 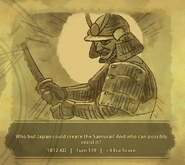 Historic Moment for building the Samurai