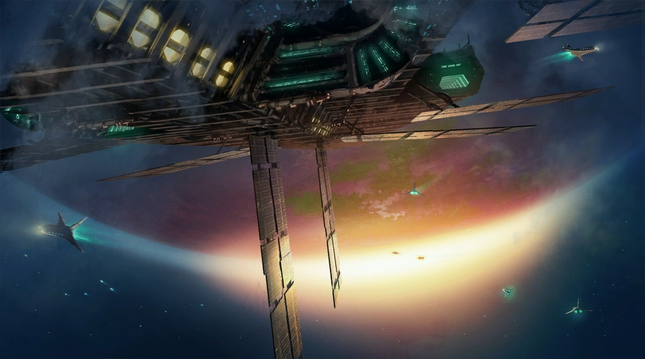 Do you want to master space? To leave all your rivals breathing your technological dust? To research everything a civilization can and head to the future? Then science victory is your victory!

This article discusses the ways for achieving science victory in Civilization V. It was written for the newest expansion - Brave New World - but it may also serve older versions of the game.

Before you can construct a spaceship, you must first develop the Apollo Program project in one of your cities. Next, you need to research most of the technologies in the Information Era to gain access to all Spaceship Parts. Then you need to build the following parts of the Spaceship:

Note that each of the parts above requires 1

Aluminum resource, but only while they are under construction. Therefore, you can build the whole spaceship while only having access to 1 Aluminum, as long as you build the parts one at a time. It is of course faster to build multiple parts at the same time, so try to obtain more Aluminum - with Recycling Centers if nothing else.

Finally, you will have to bring all parts to your

Capital and use the special "Add to Spaceship" option to complete the vessel and launch it into Space.

As soon as you start constructing the Spaceship by adding the first part, you'll see a launch pad appear in your

Capital. If you scroll down, you'll be able to see each individual part of the ship as it takes its place in the whole skeleton, and know which parts you are missing.

Science victory is the most straightforward path to victory in the game - you just need to ensure fast technological research pace for your empire, and eventually you'll be able to construct and launch the Spaceship. You don't need to go out of your way to do anything else, like influence other nations, or gain many City-State allies, etc. You may simply develop your empire, and if you see that towards the end of the game you're making good technological progress, you may head for a Science victory.

That being said, competing against all other nations for achieving a Science victory first is anything but easy - they may hamper your progress at the very end through the World Congress, or they could invade your lands before you're ready, or someone may simply outpace you and launch their Spaceship first! That's why, as with all other types of victory, you need a strategy for obtaining Science victory.

Of course, the goal being to research as many technologies as fast as possible, your first concern should be

Faith, which are produced only from buildings, each and every active

Science to its city's base, without you having to do anything! This means that the more

Citizens you have, the more

Science you produce automatically, again without having to do anything else.

Scientist specialists, especially in small cities (if you can afford it, of course, no use starving your city just to have one

Scientist specialist), so that you can add

Science to your base.

The above considerations may lead you to believe that larger empires are automatically in a better position to advance technologically, and this was to a great degree correct until Gods & Kings. Brave New World, however, introduces a 2% increase in

Science cost for every technology, based on the number of cities you own, which means that larger empires no longer necessarily research technologies faster, unless they manage their cities well. In some cases, having more cities can impede technological progress - a conqueror who took 10 cities in the last 50 turns might find himself bogged down if he didn't bother to develop the captured cities. His tech research is now 20% more expensive, while the cities he conquered won't be producing nearly enough

Science to compensate for that, let alone enough to take him ahead!

Don't forget that puppet cities count towards the total number of cities you own in Brave New World... And they also produce 25% less

Science than their normal output!

Science is a stat which is almost absent from terrain, but there are some important exceptions:

Scientific buildings usually base their bonus effects on number of

Citizens, but some of them also give a percentage increase over the base

Science production of the city. For example, in a city with 20

Citizens, a Library will produce +10

Citizens, the same building will produce only +3

Science. So, build science buildings first in cities that will benefit the most from them. For example, build Universities first in cities with large population, or ones that are adjacent to jungle tiles - this way you'll bump up your scientific production the most, and right away. This strategy is actually valid for any kind of building in the game, working on a percentage-increase basis.

As for the tech progression, it is pretty obvious - the most vital thing is to maximize Science output ASAP. So, to do that you work your way up the tech tree with regards to technologies unlocking Science buildings first. This means you should start with Pottery, then Writing, then try to build the Great Library (not only because it's a good Wonder, but also because it'll provide a free Library in your

Capital). Later in the Medieval Era work straight to Education, then straight to Scientific Theory and Plastics in the Industrial Era, and Atomic Theory in the Atomic Era. As soon as you research the tech, start building the relevant

Science building, first in your greatest

Science centers, then in the other cities.

There are a number of Policies that will help you in achieving a science victory:

There aren't many World Wonders that directly aid in achieving a science victory, but you could also construct some of them for their free Social Policies. These are the Wonders you really want:

Relations with Other Nations[]

As mentioned elsewhere, invading other nations and constructing a huge empire may not be the best way to achieve a Science victory. It is, of course, possible to go militaristic and seize strategically important lands containing large cities, but then you have to make them useful ASAP - as soon as the Resistance phase is over, annex the city and rebuild its

Science production so that it doesn't drag your research down. It is also worth noting that thanks to your scientific prowess, you should normally have one of the most advanced armies in terms of military tech - something very important for combat.

An important reason to go to war with someone is if they are close to achieving victory - a successful war will hamper their progress, allowing you to outpace them.

Still, it's much more lucrative to maintain peaceful relations with most nations, for reasons that will be discussed below.

These can boost your progress considerably, especially if you managed to get the Scientific Revolution policy, and the Porcelain Tower. But in order to strike up these agreements, you need to be Friends with a nation, and for that to happen you need Friendly diplomatic status with them. And it's difficult (although not impossible) to be friendly with someone you invaded. Also, the Agreement is immediately cancelled if any party declares war on the other. Always try to maintain Friendly relationship status with at least 2 nations, and strike up regular Research Agreements with them.

Note that you also need

Gold for Research Agreements, so don't waste your treasury! The initial price of an Agreement is 200

Another way of boosting research without actually working for it is stealing technologies with your spies. Note that this is only possible when another nation is more advanced technologically than you, so when assigning spies, look for the nation with a faster technology researching than your own (you can see that by mousing over the Score of a nation in the Diplomatic screen). Usually at some point you will become the most advanced nation, and then it will be time to turn your Spies to other tasks, like Diplomacy for example.

There are some important Resolutions you want to be adopted by the Congress: