?
Scipio is a special land unit from the Classical age modpack of Call to Power II. His full name is Cn Cornelus Scipio (with the "Cn" representing the rank of "Consul").

Scipio is a general that lived from 236-183 BC. He is credited with defeating the Carthaginians in the Battle of Zama in 202 BC. Scipio failed at killing Hannibal Barca but he still gets the credit for having defeated the Carthaginians. Most other facts about his personal life are not referenced in this game but he is considered a very effective general with strong attack abilities. 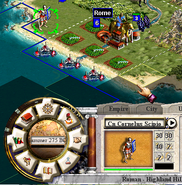 Scipio next to the city of Rome