English unique Renaissance era naval unit that replaces the Privateer. Can capture enemy ships. Cannot be seen unless adjacent to it.

The Sea Dog is a unique naval raider unit of the English civilization in Civilization VI. It replaces the Privateer.

Compared to the Privateer which it replaces, the Sea Dog has a minor

Combat Strength edge but, more importantly, has one very cool advantage: it can capture enemy ships! If it is adjacent to an enemy naval unit that would be destroyed by its attack, there is a chance that the unit is captured instead. This chance is based on the difference between the Sea Dog's base

Ranged Strength and the enemy's

Combat Strength, and does not take into account any modifiers from

The Sea Dog's ability has the potential to turn the English into the strongest naval civilization in the game, if used correctly. Build a fleet of 3-4 Sea Dogs, then immediately declare war on a nation with a fleet. It doesn't even need to be a neighboring nation, and you don't even need to conquer any of its territory - just send your own fleet and start marauding on their coasts. When they react, proceed to take possession of their fleet and enhance your own!

Sea Dogs work best as Armadas - a Sea Dog Armada has a 67% chance of capturing an enemy Battleship, and can even capture a Nuclear Submarine 17% of the time. However, they lose the ability to capture ships when upgraded.

Another uniqueness of this unit is that it is unlocked with Mercantilism on the civic tree, meaning you should have somewhat good

Culture generation in the early game. Aim for Exploration afterwards so you have access to Press Gangs, considering the Sea Dog has a rather high

Production cost. Better yet, if you are in a Dark Age, you can also run Letters of Marque just to build your fleet of Sea Dogs a little bit faster.

Heroic privateers to the English, pirates to everyone else. From 1560 to 1605 AD, Elizabeth I gave permission to her “Sea Dogs” to attack the ships and colonies of other nations – especially the Spanish – at will, usually without the nicety of being at war. The likes of Sir John Hawkins and Sir Francis Drake and Sir Walter Raleigh (in fact, many of these pirates were knighted) raided across the Caribbean and even reached the California coast to ply their bloody trade: grabbing as much treasure as they could for the English crown ... and themselves of course.  In England’s hour of greatest need, the Sea Dogs spearheaded Elizabeth’s defense against the Spanish Armada in 1588. Hawkins is also known as the pioneer of the British slave trade, and Drake took part in the Rathlin Island Massacre of some 600 men, women, and children off the coast of Ireland. 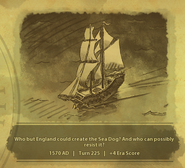