Science from each adjacent district tile.

Wikipedia has a page called:
Seowon

The Seowon is a unique

District of the Korean civilization in Civilization VI: Rise and Fall. It replaces the Campus and must be built on Hills.

The following buildings can be constructed in a Seowon:

The Seowon is undoubtedly the centerpiece of the entire Korean gameplay, so much so that even the entire civilization ability, Three Kingdoms, revolves solely around it. Learning how to play Korea effectively only boils down to how place Seowons in the most efficient manner, which is pretty simple.

The Seowon has a starting adjacency bonus of 4, scaling downward by 1 for every adjacent

District like the City Center or Aqueduct. The only exception is the Government Plaza, whose own built-in bonus cancels the penalty. For this reason, combined with the civilization ability, the best spot to place down a Seowon is in the second ring of the city in an open area where you can start putting down Farms and Mines afterwards. Keep in mind that Seowons can only be built on Hills when you settle new cities. Considering the significant

Science output of this

District and the level of importance it has for Korea, Pottery and Writing should always be the first two technologies you research every game. The only detour that you can sometimes take is to pick up Mining, if you happen to spawn in an area with a lot of Woods, and you need to clear them to make space for your Seowon.

This also means that Natural Philosophy (unlocked with Recorded History) and Rationalism (unlocked with The Enlightenment) are two incredibly powerful cards for Korea, and thus their respective civics will need to be beelined as quickly as possible, especially Recorded History, since Natural Philosophy is just an easier card to be effective for Korea and it will shine in every game and every situation. Regarding Rationalism, after a series of nerfs to this card, its power level is definitely not where it used to be. While Korea pretty much guarantees the first condition (high adjacency Campuses), growing cities to 15

Population reliably is a tall order. Their civilization ability is very underwhelming and serves a complementary role more than anything, additional

Food from Farms next to Seowons will barely be enough to set you apart from other civilizations without any bonus towards growth. Therefore, if you mess up the Seowon placement by putting down a

District next to it, there is no way to reverse that since the Seowon's adjacency bonus only scales downward, never upward. This actually happens more often than it should, even for experienced players. Since the Seowon is most likely the first

District you build in every city, and for every

District afterward, the habit of putting down

Districts where they benefit from the highest starting adjacency often distracts from the fact that that optimal spot may be right next to a Seowon, thus disqualifying that Seowon from being able to benefit from the one condition of Rationalism that is supposed to be easy to grab. For that reason, whenever you put down a Seowon, you may want to put a marker to remind yourself never construct a

District in that area. Last but not least, try to plan your game so that you can get a Golden Age in Industrial Era and/or Modern Era, so you can pick the Heartbeat of Steam Dedication. When combined with Natural Philosophy, each Seowon grants up to 8

Production on top of the

Science it is already generating.

As highlighted above (and even more so in the Babylon article),

Culture generation is crucial for any scientific civilization, and Korea is no exception. However, if you are looking for a unique experience playing such a straightforward civilization like Korea, try to aim for a Dark Age in Medieval Era to have access to Monasticism. With an outrageous early

Science is a lucrative deal, even at the cost of 25%

Culture. This card is a

Dark Age policy card, available only in the Classical and Medieval Era. Nonetheless, you need time to build Holy Sites to benefit from it, and the Era Score from building the Seowon in Ancient Era makes the most viable time to be in a Dark Age is Medieval. Even if you cannot enter a Dark Age in Medieval Era, the

Undoubtedly, the biggest and most exploitable weakness of this

District is how vulnerable it is to espionage. The fact that you will have a Seowon in every single city means there are always more points of entry for Steal Tech Boost missions than you can ever protect. Also, since the Seowon has to be built in isolation, protecting it means all other

Districts will end up being easy preys: your Governors will be removed, your Industrial Zones will be pillaged and your Commercial Hubs will be constantly robbed. For this reason, any Spy that you can unlock should be used for defensive purposes. Korea is pretty much a one-trick pony, it is very well-known that if this civilization is in the game, it will go for a scientific victory. Therefore, it is better to use your agents to defend your obvious weak points that every scientific civilization has, rather than using them offensively. Any Spy

Promotion that helps with counterespionage is great for Korea: Polygraph, Quartermaster, Surveillance, or the Cryptography policy card as well.

In Gathering Storm, the power level of the Seowon is a bit hampered even though there is no direct nerf to this district. The regular Campus is now the easiest district to give a high starting adjacency bonus, due to major bonuses next to Reefs and Geothermal Fissures and many curvy mountain ranges on the map (thanks to new map generations). On certain map types (most notably, Primordial, where Mountains and Geothermal Fissures appear in huge numbers), the Seowon even loses sometimes when compared to its counterpart, since its

Science is capped at 4 and can only scale downward. Even then, however, it is still only half as expensive as the Campus, which is a powerful option to have in and of itself, not to mention the boosts that it gives to basic improvements thanks to Korea's civilization ability.

An educational crisis in 16th Century Korea brought about the seowon, a private institution designed to fill the scholarly void. The heavy emphasis on Confucian teachings and rituals were often expressed in the modest appearance of its structures. The preponderance of aristocratic children attending made the seowon ideal for discussing politics. This blend of Neo-Confucianism and topical matters created an ideal setting to explore new ideas about Korea’s contemporary culture and government. 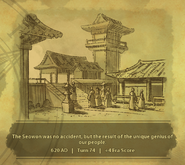 Historic Moment for building the Seowon