Civilian unit of the Ancient Era

Population by 1 when completed. Requires at least 2


The Settler is an Ancient Era civilian unit in Civilization VI. It is available without any technological research.

Settlers are used to expand your empire. Whenever a Settler is built or purchased in a city, that city's

Population is lowered by 1 as some of your people strike out to settle new lands.

Sight than all other starting units, which allows them to spot good city locations from afar. However, don't get tempted to use them for scouting. First, they are much more useful for expanding your empire than wandering around searching for Tribal Villages and such. Second, as civilian units, Settlers are defenseless, and thus it is prudent to escort them with a military unit as they search for a good place to found a new city. Unlike in Civilization V, a Settler that is captured from another civilization will remain a Settler under the control of the civilization that captured it.

Production cost of a Settler scales according to the following formula, in which x is the number of Settlers you've trained (including your initial one):

Captured Settlers and conquered cities do not increase the cost of the next Settler, but Settlers received for free do.

There have always been those willing to leave behind everything familiar in the hopes of finding a better life over that hill. These are the settlers, the ones who scattered mankind over the globe. Whether they travelled by water or by land or by air, the pioneers eventually came to a place they liked, usually one that offered good soil, clean water, and some prospect of safety … but not always. Some ended their journey in desert, marsh, ice field, or mountain valley. And, inevitably, among hostile natives. The reasons they left their old homes behind were as varied as the terrain they traversed: hunger, wealth, ambition, adventure, fear, freedom, and above all the hope for their descendants to have what they did not. Where they stopped became villages, towns, cities, and civilizations. And, the cycle began again... 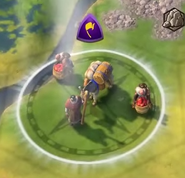 A Roman Settler on the map
Community content is available under CC-BY-SA unless otherwise noted.
Advertisement